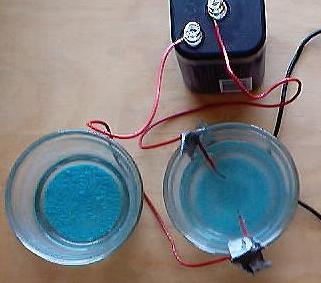 The presence of barium as well as other metallic particulates in our atmosphere has now been demonstrated through a variety of testing methods in direct association with aircraft aerosol operations. The method presented here has the potential of providing a simple and verifiable method to provide further evidence of criminal operations that continue to be conducted. Using the box fan filter described in the previous Carnicom paper titled “INEXPENSIVE FILTRATION“ , pieces of the filter materials from both indoor and outdoor samples are cut into small pieces and soaked in distilled water and rung out into glass dishes. These solutions are then subjected to electrolysis, using a six-volt lantern battery with copper electrodes. After approximately 24-48 hours, a precipitate forms in the dishes that is further subjected to examination. At this point, a series of observations and tests are performed that show the precipitate to be barium sulphate…which is a grave concern to all citizens around the globe. The participation of independent professionals and researchers is again called for to substantiate or refute the current endeavors, as the consequences of these findings, if confirmed, pose significant health risks to the public at large.