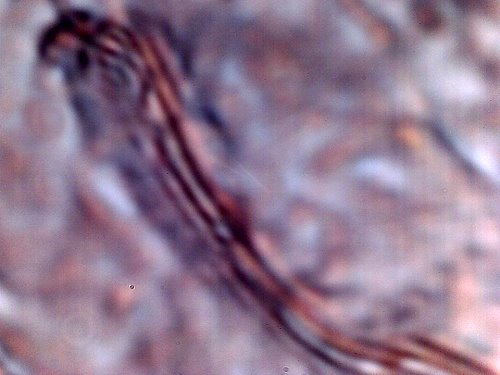 There is increasing evidence that the general population may be affected by at least four pathogenic forms, and that many have been seriously compromised by at least four pathogenic forms under examination. These recurring pathogen forms are: 1) An encasing or encapsulating filament, often barely visible to the human eye, measuring on the order of 12 to 20 microns in thickness. This bounding filament form usually contains within it a network of sub-micron fibers that are generally in parallel alignment with one another; 2) A network of sub-micron filament forms that are usually encased within the bounding filament referred to above. This form has some morphological similarity to fungal forms, but no suitable match to any known species exists at this time; 3) A sub-micron spherical to oblate structure whose best size estimate is currently on the order of 0.5 - 0.7 microns (asbestos fibers are on the order of around 2 microns). These structures can and often do occur in large numbers within the biological samples; and 4) What is being called, for the time being, a "hybrid" form. This form has properties that are somewhat in between the sub-micron Chlamydia-like form and the sub-micron filament form. The remainder of this paper will present evidence that visible skin anomalies are not a suitable criteria to establish the existence of the so-called "Morgellon’s condition" and that certain pathogenic forms may be repeating internally within a broad cross-section of the general population.