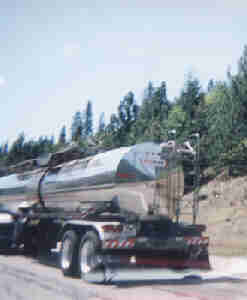 An interesting encounter by Clifford Carnicom is detailed where he witnessed unusual activity by a truck on Northern California’s I-5 highway. Clifford passed and was passed by a trucker who didn’t stop at weigh stations like the all the other trucks on the highway had. There were no DOT placards on the truck, and it was obvious the truck was hauling chemicals, as Mr. Carnicom could see a dripping yellow-amber-brown fluid that resembled fluid that landed on his car years earlier. As Clifford was getting the truck’s numbers, he was followed by a dark car that paced him no matter how fast or slow he drove. After pacing slowing down and pacing this car, the car took an exit. A second similar looking truck was detected on his return trip days later. A reader on the Carnicom chat board, after having read of this experience, let Mr. Carnicom know that the I-5 corridor had prepass for trucks installed back in 1994 that allowed trucks to be weighed electronically without stopping.