A MECHANISM OF BLOOD DAMAGE 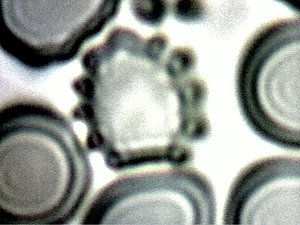 An organism and a method that damages the condition of the blood has now been identified and it has been directly observed.  The blood variations reported here are in direct association with the existence of and the severity of the so-called “Morgellons” condition.

The degradation occurs, at least in part, as a result of the existence of a chlamydia-like organism that has been repeatedly called to attention within the research during the past several years. This organism, along with a pleomorphic form tentatively identified as a mycoplasma variation, as well as certain filamentous forms, have been identified as common denominators in past and active biological and environmental examinations.

It will be recalled from earlier studies that essentially all individuals observed thus far display the presence of these blood anomalies to varying degree; statistically it would certainly appear as though the general population is subject to these forms.  It has also been stated that the severity of the damage to the blood appears to occur in direct correlation with the manifestation of symptoms of the Morgellon’s condition.

It is commonly perceived that skin anomalies and lesions (eruptions) are the major indicators as to the presence of the Morgellons “condition.”  It is asserted by this researcher that this criteria is completely and totally inadequate to establish the existence of the condition.  A more comprehensive assessment appears to be that the presence of certain filamentous forms internal to the body and the presence of the chlamydia-like organism within the blood more positively establishes the existence of the condition.  The presence of skin lesions (eruptions) and or filaments appears to be simply an outward manifestation by a subset of the population of the underlying biological changes that have occurred within the body.   Thus far, all individuals studied show these changes within the body to varying degree.

The specific organisms (four specific forms in total, thus far) involved still require positive identification, as they have for several years now.  I do not claim any medical or biological expertise at the level that is required.  The size of the organisms alone is beyond conventional microscopy and they have been identified only with custom microscopic developments.  Chlamydia-like and mycoplasma-like identifications must only be regarded as tentative and they are based primarily upon observation, research and deduction.

One of the dominant characteristics of the Chlamydia genus is that its members are metabolically incomplete, and that they require the energy of the host to thrive; this is one reason why they exist as intracellular (within the cell) within the host.  In addition, intracellular organisms present a series of challenges to the immune system for detection and eradication, as recognition of a pathogen becomes much more difficult internal to the cell.

One of the dominant characteristics of the Mycoplama genus is that the species lack a cell wall, and hence the ability to assume various forms, i.e, pleomorphic.

Regardless of the eventual identifications that are to take place, the involvement of unconventional biology and genetic modification appears to affirmed by the unusual characteristics, enclosure and transport of these particular organisms under study.

The importance of this paper is that a specific organism and method of blood degradation that is in association with the Morgellons condition has been identified by function and has been observed and recorded, and that this same specific organism has been under study from several different vantage points for several years now.  This chlamydia-like organism remains a focal point of investigation with respect to both the Aerosol Operations and the Morgellons issue; from the current studies it is expected to remain so for some time.  The ubiquity and importance of this specific, (but still unidentified by species), organism will become even more apparent in future writings.  In general, it would appear that the chlamydia-like and the mycoplasma-like intrusions set the stage for broader systematic degradation, immune suppression and additional pleomorphic manifestations upon sufficient invasion.  In addition, genetic modification and transformation of the infective agents as well as the hosts are to be considered as very real possibilities.

The specific method of blood damage referred to in this paper is as follows:

2. The chlamydia-like organism does appear to be attracted to the outer wall of the erythrocytes.

3. In the early stages of intrusion, the chlamydia like structures can surround and bind to the outer wall of the erthryocyte, with no damage to the cell wall necessarily apparent.

4. Upon increased intrusion of the cell, the chlamydia-like organism will be seen to have been incorporated within the cell wall.  It is at this point that a breakdown of the integrity of the cell wall can often be observed.

5. Upon further intrusion, the chlamydia-like organism can exist in relatively large numbers within the erythrocyte.  Further damage to the integrity of the cell occurs.

6. In extreme cases observed thus far, the integrity of the cell wall is radically compromised, along with the general structure of the red blood cells.  Existence of the chlamydia-like organism can be rampant within the blood.  The functioning of the blood would appear to be seriously impaired at this point and this is expected to have a major impact upon the health of an individual. The pleomorphic organism under study (i.e., mycoplasma-like) is also commonly observed under these conditions.  Skin lesions (eruptions) and anomalies, such as filaments, may also be more common at this stage of the condition.

It is to be considered only as anecdotal information, but it is a fact that this individual encountered a significant onset of illness in the midst of this same time interval. The symptoms of illness did have a certain level of correspondence with those that are associated with Chlamydia pneumonia. It is also to be considered as anecdotal information, but aerosol operations of significance were conducted during the earlier portion of this same three week interval and the week preceding. No conclusions regarding direct association with a particular illness or atmospheric conditions are being made at this time. Magnification approx. 10,000x.

Additional Note : The term “eruptions” vs. “lesions” has been introduced into this paper due to discussions with an individual of medical background.  This individual has studied and observed the dynamics of certain skin anomalies in detail.  It has been suggested that this term may be more accurate in describing the specifics of presentation, and it is correspondingly offered to the readership for consideration.  Appreciation is extended to this individual for the discernment that has been provided.