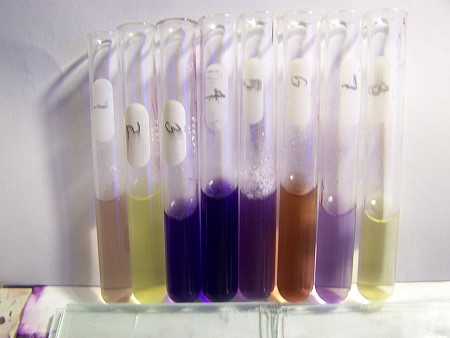 A proteinaceous complex that derives from oral filament cultures has been identified. This finding, along with the significant presence of iron within the same culture growths, is paramount in the understanding of the physical nature of the filaments characteristic of the condition.

The method of determination of this complex has been protracted and difficult, primarily because of the lack of resources that are available to achieve a more direct knowledge of composition.  The work has been conducted over a period of several months, and the results have been arrived at through a combination of deductive methods, qualitative chemical tests, column chromatography, analytical chemical separation techniques, and visible light spectroscopy.  Methods of thin layer chromatography, distillation and electrophoresis have also been included.   Additional resources, should they become available, can hasten the process of discovery which remains in midstream.  This declaration itself has been on hold for more than two months, until the opportunity of presentation has afforded itself.

To give an example of the importance of protein discoveries, the success in curtailment of harm from the AIDs virus has been accomplished largely from the massive efforts that have been made to understand the protein complexes involved.  Proteins, upon discovery of uniqueness, are themselves patentable and are the basis of much of the pharmaceutical industry.  This exists as a controversial subject in its own right.  With the proper equipment and resources, many of the questions and problems posed by the topic of this paper could be answered directly and promptly.

Proteins are classically designated as the “building blocks” of nature.  It is quite common for approximately one-half of the composition of an organism to be of proteins.  Understanding this aspect of the filament nature of the Morgellons condition is obviously of the highest priority of any biochemical research project; to date, however, this information has been essentially non-existent or scant.

A recent report by the Centers for Disease Control (CDC) raises the ante of this controversy by themselves declaring a significant percentage of the materials studied to be composed of proteins.  The report subsequently proceeds to ignore any direct presentation of laboratory results and strategically uses terms such as “likely” and “similar” versus a direct presentation of chemical composition to the molecular level, as is required. The report also eventually leads to a pre-directed “conclusion” that transforms the physical presence of these proteins into the metaphysical world and classifies the manifestation of this physical and laboratory presence as a continuing “delusional” condition.

As another illustration of the inexcusable delay and failings of this report, let it be known that when a critical and unexpected health situation arrived on the scene some time ago, namely the Hantavirus crisis, the CDC had the issue contained, sourced and identified within a couple of weeks of investigation.  Six years later, several hundred thousand dollars more, in question of collusion with the Armed Forces of Pathology, and we remain at the same and exact original point of agenda driven policy.  This shirk from proper investigation and disclosure of factual results is a disservice to the public welfare, benefit, interest and health.

Suffice it to say that the objective of the scientific method is to test and resolve a hypothesis, and that it is not to “generate hypotheses” as a primary goal.  Such thinking is to encourage the arena of speculation and obfuscation versus resolution, which is exactly what has been accomplished with the recent report.  This is not science.  The reader is requested to read the report from a analytical, objective, scientific and critical thinking perspective and not to be duped by the vagaries and critical exclusions that are apparent within the so-called “report.”  The ludicrousness of the CDC report and the abject failure to adhere to the principles of scientific resolution will not be discussed further here.

This researcher will now proceed, from a base of limited resources, to describe the laboratory results that derive from the efforts of the Carnicom Institute.  The writer fully acknowledges that many difficulties remain and that many questions remain unanswered.  Certainly some very specific information desperately needed can not be had at this point.  The writer allows for the possibility of error and insists that further verification or refutation of the work is required.  It is, nevertheless, the state of knowledge apparent at this time.

The most succinct description of the proteinaceous complex that can be provided at this time is as follows:

An apparent metalloid dipeptide complex, likely composed of an coordinated ferric iron (III) complex.  The amino acid cysteine appears to be dominant in the composition.  There is also evidence emerging for the presence of histidine.  The most likely dipeptide forms are therefore cysteine-cysteine (i.e., cystine form) or a cysteine-histidine iron dipeptide complex.  Additional amino acids will remain a part of the investigation, as well as the variability in the spectrums as a function of pH.

There may be error within this assessment of the nature of the complex, but it is believed at this point to be an accurate statement.  There are intellectual property issues that may at some point become involved with the statement made above.  The Institute is fully aware of the importance of, and economic value of, protein identification and potential discovery.  The Institute at this time, however, does not possess the means or resources to evaluate the complex at the molecular level, which is required.  Equally, the means to pursue patent interests or protection does not exist and pharmaceutical interests may eventually emerge.  The Institute will instead place its focus on the disclosure of information that serves the public benefit and welfare, such that further and needed urgent research can take place.  The Institute is on record as opposing any proprietary developments that may develop from this research without the involvement of the Carnicom Institute.  The public health interest and welfare is to remain as the paramount goal.

Let us discuss the methods by which this conclusion has been made.  In all, more than a half dozen different techniques or methods have been used to arrive at the above statement.  These are:

1. Extended observation and analysis of a column chromatography process of separation of the protein complex from a prepared culture solution.  In particular, the interaction of the culture with copper salts became an important factor in the process of identification.

2. The use of the qualitative biuret test for proteins.

4. The use of ninhydrin applied to a solution of the complex on filter paper and then heated.

5. The reactions of a control set of amino acids, by color, upon heating in a ninhydrin solution.

6. The spectral analysis of the same set of control amino acids mentioned above.

7. The behavior of the proteinaceous complex when subject to N-acetyl cysteine and ninhydrin.

8. A positive test for the existence of iron after reduction by N-acetyl cysteine.

9. A spectral comparison of the amino acid cysteine with the proteinaceous complex under the condition of reduction and in combination with a heated ninhydrin solution.

Let us briefly describe each of these factors to gain a better understanding of how the assessment has been achieved.  A strong reliance on a series of photographs will be made to summarize the complex process that is described above.

9. The last test to be briefly presented demonstrates the presence of the cysteine amino acid within the complex.  When the eluate is subjected to N-Acetyl cysteine, the dipeptide bonds are broken and the iron is released in its free state.  The amino acids, now in their free stated, can be subjected to ninhydrin and heat and a spectrum developed.  It will be found that the resulting spectrum will match that of cysteine.  This rather complex combination of tests and events will lead to the assessment presented earlier that the protein consists of a metalloid dipeptide complex involving iron in the Fe (III) state combined with cysteine amino acids.