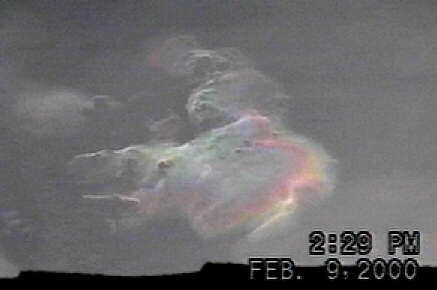 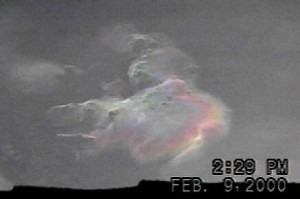 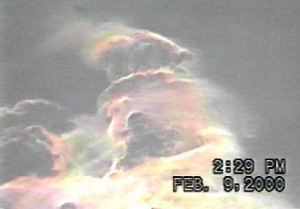 The following account was received on Feb 9 2000 along with the photographs above:

“I was outside filming today and happened to catch these photos. You couldn’t see the colors with the naked eye. At first I thought there was something wrong with the camcorder, but it wasn’t the camera. This rainbow chemcloud only lasted approx. 2 minutes and then dissipated. It was very bright pink, green, yellow and purple! There was a distinct smell of geraniums and peaches in the air at the same time. I haven’t smelled that since last summer when we had yellow rain. So far, I haven’t found anyone who has seen this. Note that it was 2:30 in the afternoon and overcast (no reflection from sunrise or sunset).

If you know of anyone else who has seen similar I’d be interested. Thanks.”