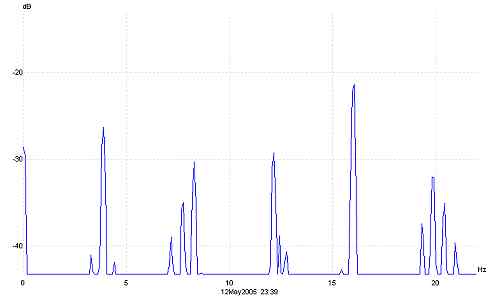 The detection of sustained Extremely Low Frequency radiation is positively confirmed. A fundamental frequency of 4 cycles per second (Hz) is established, along with the harmonics of that frequency, 8Hz, 12Hz, 16Hz, 20Hz, etc. . The indication is that this phenomenon is expected to be global in scope, due to the extreme wavelengths associated with these frequencies. This is further confirmed by the orientation of the maximum field strength in the direction of the magnetic field lines of the earth.

The detection of this radiation puts forth the foreboding prospect of many applications and implications, including those of military, biological, psychological, health, energy, weapon systems and geophysical natures. The discovery of this fundamental frequency has profound geophysical implications as the Schumann frequency, i.e, the natural resonant frequency of the earth, is itself being exceeded in wavelength. There is no known natural source for its origin at this time.

The initial stages of this work were conducted from November 2002 to April 2003. Approximately two dozen papers outlining that research exist on this site. Extended research into the conductivity changes in our modified atmosphere has necessitated a return to this topic. The repeated detection of this radiation over a 2 1/2 year period indicates that this represents a continuous and fundamental change in the global electromagnetic environment.

As there is extensive literature and evidence on the potentially detrimental biological, psychological and health effects upon humans of this radiation type, the international community is requested to openly investigate, locate and determine the source of this energy. Should it be determined to be of artificial origin, the intent and purpose of this radiation is subject to public challenge. The use of ELF pulse energy with ionospheric heaters may serve as a starting point for this investigation.  Environmental monitoring and protection is a right of the citizen.

The radiation has now been measured by three completely different techniques over extensive time periods, including the use of a loop antenna -amplifier circuit in the time domain, an analog resonant circuit in combination with a sensitive gaussmeter and frequency generator, and the spectral analysis of the ELF-VLF receiver signal.

The location of this research is in the southwestern United States.

The reception of these apparently continuous signals can now be verified in a number of different ways:

Details of the ELF-VLF receiver circuit that has been built are available on this site; there have been minor experimental modifications to circuit components over time.  A outside loop antenna of approximately 12H has been constructed to replace the original inductor. The ELF-VLF circuit has now been used in both the time and spectral domains with equivalent results.  The ELF-VLF receiver detects the fundamental, the odd and the even harmonics during recent tests.

The analog method can be verified with the construction of a resonant coil capacitor circuit. The resonant frequency should be established in the range of the frequencies under measurement. It will be found that an injection of the fundamental frequency or the odd  harmonics will induce a visibly detectable oscillation of the gaussmeter needle when the pickup coil is placed in the vicinity of the coil of the LC circuit; oscillation will not occur at non-resonant frequencies. The 60Hz power signal is relatively powerful and simple to detect with this method. The analog method appears to produce primarily the odd harmonics ( 1,3,5) and the fundamental frequency for measurement. At approximately 30Hz it becomes increasingly difficult to separate out the components of the ambient 60Hz power signal.