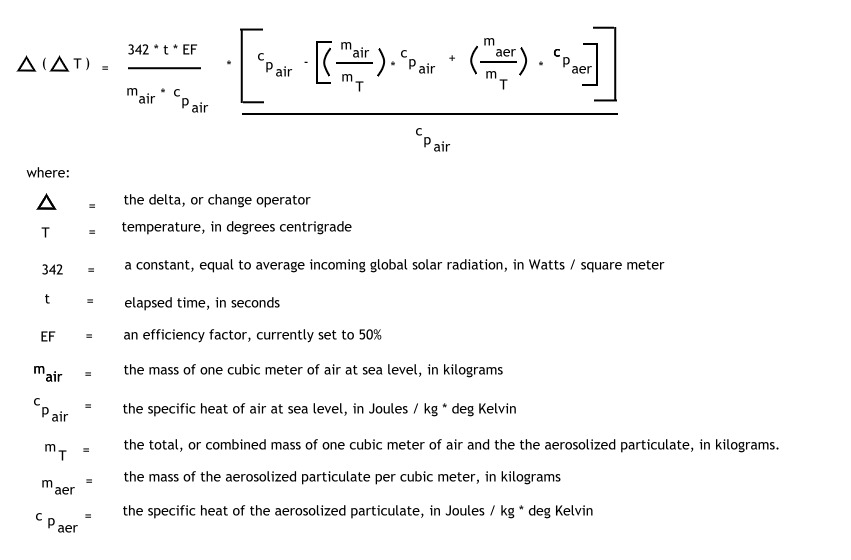 The details of the Global Warming Model  are presented on this page.

The model has the following final form:

The model is developed in the following manner: (text form)

The definition of heat capacity is given as1

The specific heat capacity is furthermore defined as:2

where Q is in joules, m is the mass in kilograms (kg) and T is in degrees Kelvin or centigrade, and del is the change operator.

Specific heats are measured values that are commonly available, and they indicate how much energy is required to raise a unit volume of material a unit rise in temperature (centrigrade or Kelvin).

Specific heats can be measured at constant pressure (cp) or constant volume (cv). Specific heats for gases do not vary significantly over large temperature variations3, and they may therefore usually be treated as constants.  A suitable value of cp for air is 1.003 kJ/ kg K4. For solids and liquids, the difference between cp and cv is usually quite small5 and can usually be ignored; values for cp are readily available.

As the definition of specific heat results from a differential form, this paper will focus on the change in a small volume of air, namely 1 cubic meter of air under ideal gas conditions.

The specific heat can be rearranged to:

this is equivalent to:

where t is time in seconds, and Watts is the incoming energy in joules /second.

The model under consideration examines the above change from a differential standpoint, i.e., what is the effect upon temperature change with respect to an incremental change in input energy for a unit mass of air?  The incremental change in input energy will result from the change in specific heat of a mixture, i.e, air vs. air with aerosolized particulates.  Developing further, our model now has the form:

The model will also be permitted to include an efficiency factor (EF), as not all of the energy coming into the system (i.e., solar energy) will be absorbed.  A current estimate for this efficiency factor is set at 50 percent.6

The next problem is to determine a value of cp for the modified atmosphere, i.,e. air with aerosolized particulates added to the cubic meter of air under examination.  The specific heat capacity of a mixture is given7 as:

mfi is defined as mi / m

Let us now refer to:

mair = mass of 1 cubic meter of air in kg

It can be proposed that del (Watts) can be aequately represented by:

which is equivalent to the model presented above.

The average incoming solar radiation (insolation) to the earth will be taken as 342 W / m2.8

The efficiency factor is selected as .50.

The model evaluated with respect to variations in time and mass concentration of the aerosol will produce the graphic result of this report.  The final units of the model are in degrees centigrade per m2, which corresponds to the differential element of air chosen as 1 cubic meter.  A more complete partial differential model of change with respect to both del (Watts) and del (cp)  may be pursued in the future if warranted. The model is not intended by any respects to be all inclusive of the global warming issue; it is intended to introduce, in a quantitative sense, the consideration of heating of the lower atmosphere from the artificial introduction of particulates.