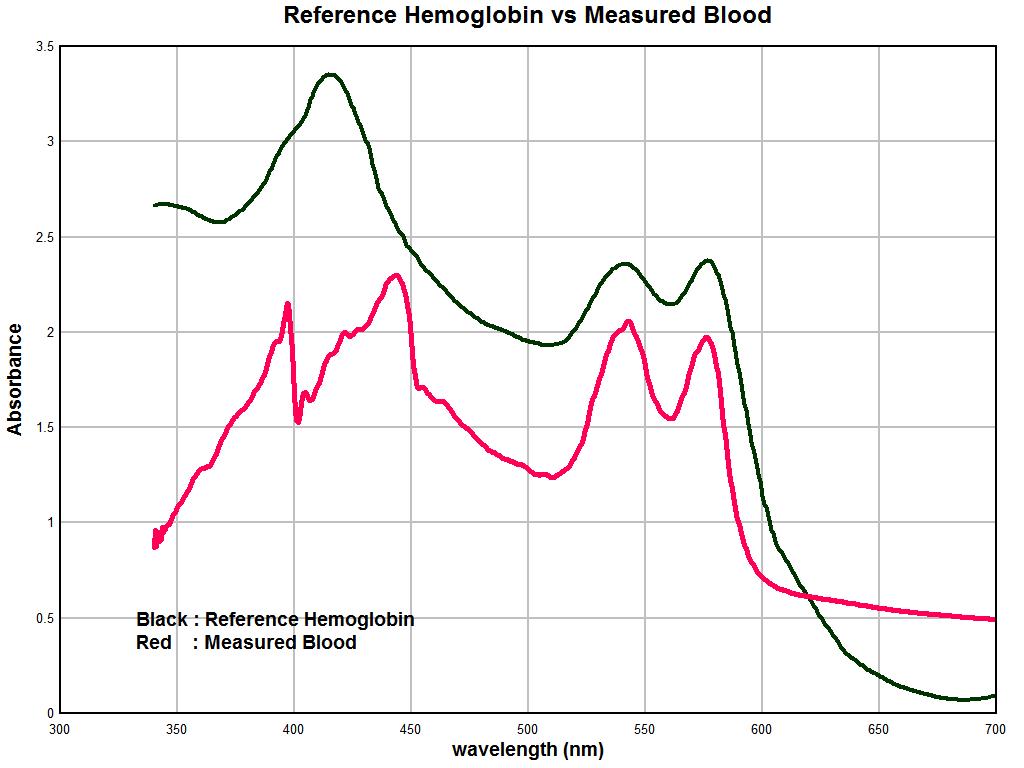 The above shows the nature of the change and of the problem.  All matter reacts in a unique fashion to electromagnetic energy which, in this case, is visible light.  Hemoglobin, (the primary protein in human blood cells), has such a unique and characteristic spectrum over the visible light range.  This expected, normal, or reference spectrum of hemoglobin is shown with the black line in the graph above1.  This spectrum shows how a substance or element reacts to energy, and the locations of the peaks in the graph are where the hemoglobin absorbs the most energy in the visible range.  In this case, this should be at approximately 414, 542 and 576 nanometers respectively.  There are important variations to this expectation, and they pose serious problems that are to be confronted.

The red line in the graph shows the average hemoglobin spectrum as measured within a set of nine essentially random individuals, ranging from approximately 23 to 70 years of age.  The sample size may be increased further in the future but statistical significance is nevertheless already attained.  Such a monumental change in the basic nature and character of a fundamental and crucial protein within the human body is a manifestation of significant biochemical changes within that same body. By no measure of a “normal” state of health would such a change be regarded as within “acceptable” or “expected” boundaries.  The fundamental nature of the protein, i.e., blood, has been changed in the case presented.  This researcher continues to contend that state of the blood of an individual is one of the most reliable, if not the most reliable, indicators of the existence and severity of the so-called “Morgellons” condition.

Future work and papers will focus on the interpretation of the nature of this change, and the development of a spectral method to indicate those individuals that may be subject to greater risk of existence of the condition or of more dramatic changes in the blood of the individual.  No medical inferences are to be made from this research, and it is considered to be of analytical utility only.  The medical community is invited to share in the collaboration or examination of this research as it perceived to be of benefit or not.  The spectral methods under development are anticipated to be of value in the monitoring or measurement of change of the condition in a non-invasive manner.

The graphs below will provide further insight into the spectral development process, and they are provided as a supplement to the primary finding reported above. 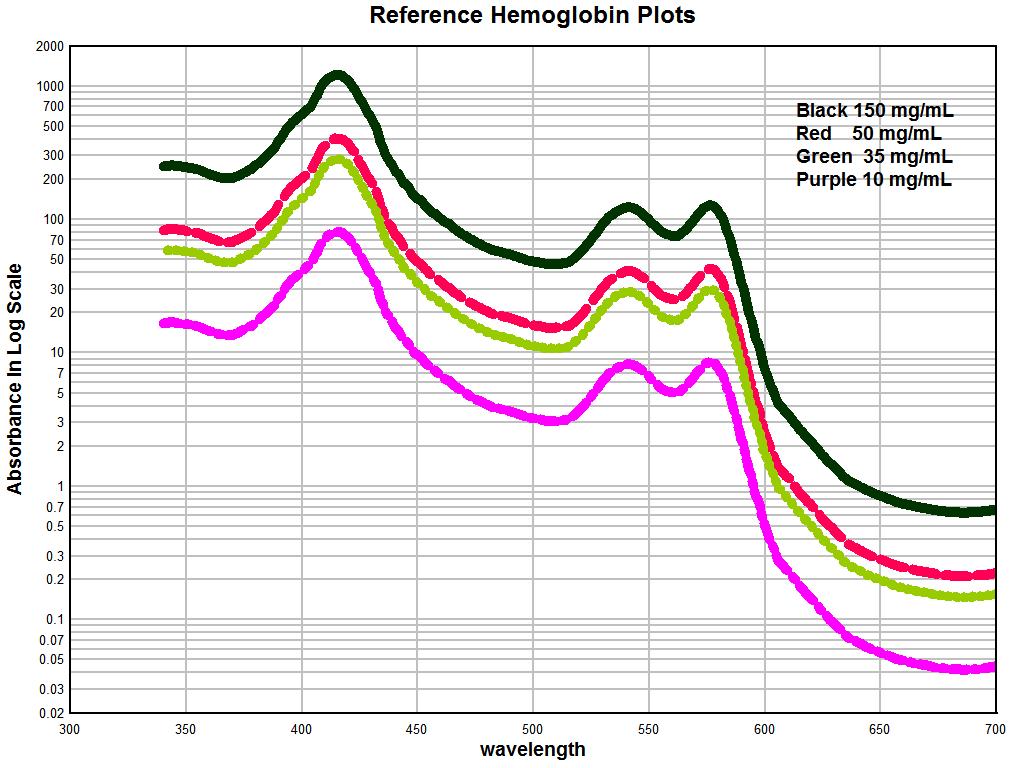 One of the ironies of the current research is that establishing a reference spectrum for hemoglobin, from current human blood samples, is problematic.  At this point none of the human blood samples studied are able to reproduce the expected spectrum of hemoglobin.  Each sample examined thus far demonstrates significant deviation from this expectation, as will also be described further below.  This finding, now from a spectral perspective, is actually in line with the concerns expressed by this researcher some time past, and this is that the general population appears to be subject to the so-called “Morgellons” condition to varying degree.  The heart of this research, then and now, is upon a particular organism repeatedly identified in the blood of all samples observed, along with oral filament samples that are also characteristic of the condition.  As such, it has actually been necessary to develop the “reference” hemoglobin spectrum from the literature, as no “pure” or live case is available to me at this time.  The graph above is such a set of reference spectrums that have been developed from the literature on the subject2.  The concentration of a substance can also affects its spectrum, and thus a process has been generalized to determine an appropriate spectrum for various concentration levels. 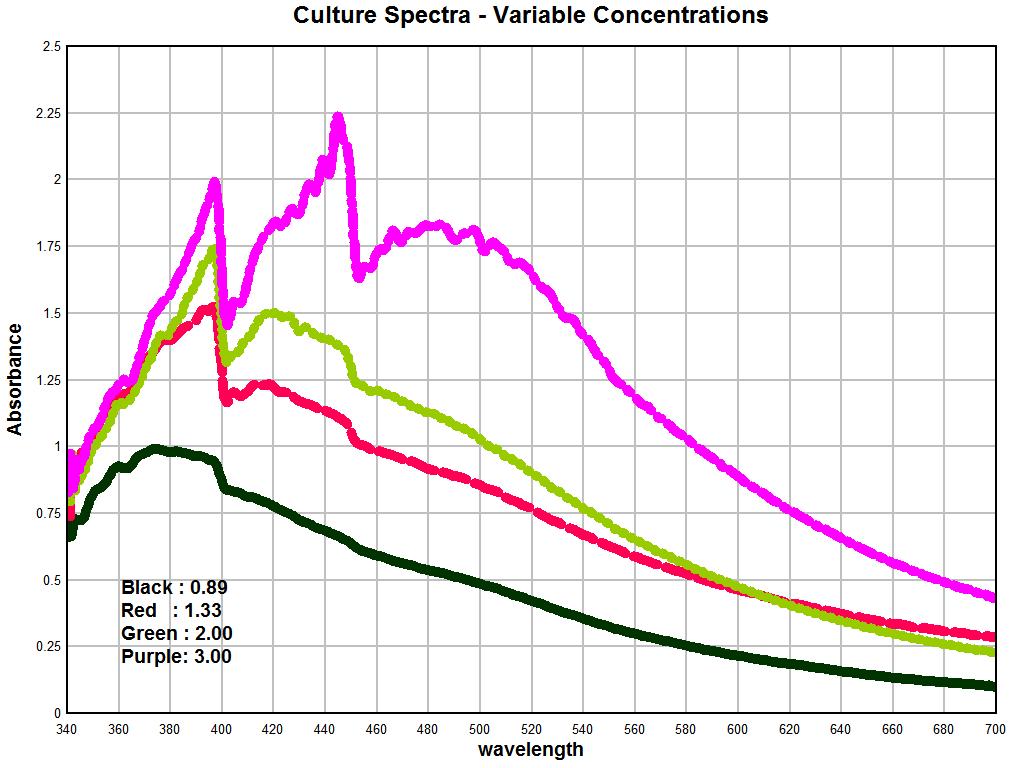 The graphs is an example of how concentration can affect the spectrum of a substance; this set of graphs shows the spectrum of the cultured organism over a fairly broad range of concentrations.  It has been discovered that low concentration levels of the culture (sodium hydroxide and heat preparation, as described earlier) do not sufficiently portray the more dramatic spectral characteristics of the organism.  This deeper examination itself was prompted by the appearance of an additional prominent peak and additional spectral influences observed within more concentrated blood samples.  The important relationships between the spectra of the culture shown immediately above and its impact upon the blood will become more apparent to us as further research is described.  In the interim, readers are invited to examine the patterns implicit between the reference hemoglobin spectrum, the spectra of the cultures, and the average spectrum of blood as it is being reported at the onset of this article.  The graph to follow at the end of this paper will show the consolidation of these influences. 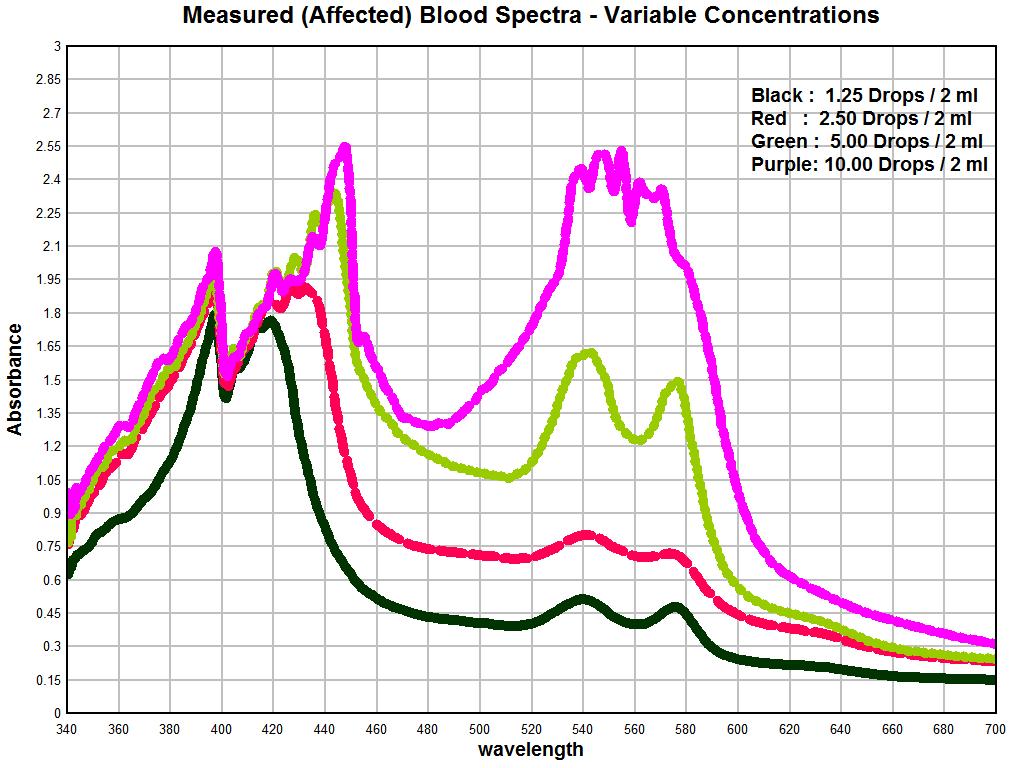 At an introductory level, this graph reveals the summary effect of the culture organism upon the blood.  Shown above is what is proving itself to be a representative sample of a human blood spectrum under various concentration levels.  Important insights may be gained by looking at this graph and how the character of the spectrum varies with respect to the concentration of the blood.  It will be found to be equally insightful to examine how the spectrum of the cultured organism (as shown in the prior graph) also varies with respect to concentration levels.  The greatest insight will be gained by combining both studies.

It will be observed, in general, that the greater the concentration of the organism within the blood, the more significant the impact is upon the hemoglobin, or blood of the individual.  This is, of course, a perfectly logical statement, but spectral analysis now provides us with a tool to more quantitatively assess that impact.  This will also, of course, be one of the major benefits of the spectral analysis of the condition that is now underway. 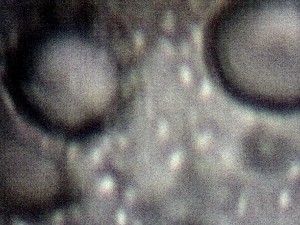 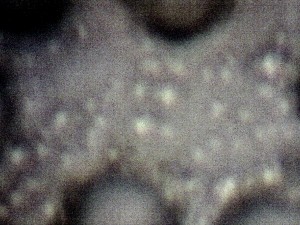 The photographs above revert to the alternative method of investigating the nature of the problem, and this is by direct observation of the blood.  This has been the historical basis for most of the work on this site until recent assistance to the Carnicom Institute (much gratitude is extended) permitted the appropriation of helpful instrumentation.  The larger structures are red blood cells, at approximately 5000x magnification.  What is essentially being recorded here is the saturation of the surrounding blood plasma with the organism that is under study and as it has been repeatedly described on this site.  This organism is at the sub-micron level and it is responsible for the culture spectra that have been shown in this report.   At this stage both observational and instrumental techniques are available to study the nature of  the “Morgellons” condition, and all information indicates a consistent and significant alteration of the basic nature, biochemical properties, and physical condition of the human blood.