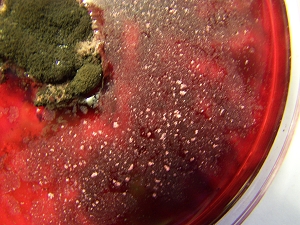 All work thus far indicates that the culture forms under examination encompass primary pathogenic forms that are in association with the so-called “Morgellons” condition.  These are the the encasing filament, the chlamydia-like organism, the mycoplasma-like (pleomorphic) organism and under certain conditions, the erythrocytic (red blood cell) form.  This list does not exclude current or future discoveries by any party that are sufficiently documented, but this list is inclusive as of this date.

An exact match in chemistry, size and growth has been established between the human biological based cultures and the cultures developed from a specific airborne filament sample that the U.S. Environmental Protection Agency (EPA) has refused to identify.  The same degree of similarity has been achieved with a culture developed from a human DNA extraction.   Please see previous reports for further information on these topics.

The chemistry of the various cultures has been under study in more detail of late, and the following assessments can be provided at this time:

1.  The culture flourishes in an acidic environment.  Most biochemical processes take place within relatively narrow and defined pH ranges.  As such, the acidic nature of the growth medium has increased in importance in the evaluation of the growth.  Conversely, it is proposed at this stage that an increase in alkalinity in the growth medium is likely to be less favorable to the growth process.  This hypothesis is eventually to be tested in detail, but several months will likely be required to detail that problem.

2. Conductivity testing indicates that the conductivity of the growth medium increases substantially in correlation with the age of the culture.  This indicates that an increase in the ion concentration of the growth medium has occurred as the culture matures.  The growth of the filament stage of the culture usually passes through three color phases during maturation : white, green and eventually black.  The full growth cycle can commonly take two to three months to complete.

3.  The pH of the culture medium itself (red wine)  does not appear to significantly change during the growth process.  When this information is coupled with that of the conductivity report above, it can be established that the H+ ion or the OH- ion concentration does not appear to change substantially during the growth process.  It does remain clear, however, that the growth propagates strongly within an acidic (increased H+ concentration, specifically red wine) environment.

4.  The increase in conductivity beckons for the determination of what ion species change as a function of growth, i.e., if not the hydrogen or hydroxide ion.    A series of qualitative chemical tests of the affected culture medium vs. a control of original red wine have been conducted.  Although the work is of a preliminary nature, it does appear as though certain ions of importance have been identified. The initial assessments at this stage are that:

a. There are indications of an increase in the chloride ion concentration (Cl-) with the age of the culture.

b.  There are indications of a decrease in the iron ion concentration (Fe2+) with the age of the culture.

5.  It appears that the chlamydia-like organism ( a focal point of the biological research underway)  can use the ferrous ion as a source of nourishment.  This assessment is reached both through qualitative chemical ion analysis and by direct observation of the culture development.

There are likely to be significant biological ramifications that would accompany such chemical changes, should these analyses be borne out in time; these are to be discussed at a later point if they are further confirmed.  It is reasonable to expect significant biochemical changes in conductivity or ion exchange within the human organism.   It is also germane to state that iron is essential in the production of hemoglobin, and that degradation of red blood cell integrity has been a primary subject of research for some time now.  It can also be stated that a decrease in iron levels can lead to increased fatigue and immune suppression.

No medical advice or diagnosis of ANY kind is made with the presentation of this information, and all readers are advised and required to work with their chosen health professional for any medical or health concerns or issues.  All reports of a biological nature are to be regarded as informational only and they derive from independent research.

This page has four embedded video segments.
A high speed connection will be required along with sufficient loading time.
Adobe Flash Player is required.

[NOTE: Video clips have disappeared, will be replaced if possible]