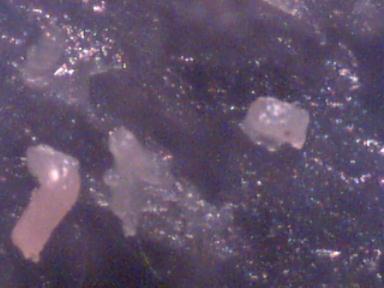 Over the course of several months, many individuals that participate within the message board attached to www.carnicom.com have become aware of the following unusual event. Under ultra-violet light (i.e., blacklight), there are bright fluorescent orange spots on the face of the observer, and especially so in the nasal area. It is reported commonly that the orange spots are difficult, if not impossible to remove, through normal cleansing. The appearance of these bright orange spots, visible only under ultra-violet radiation, was confirmed by myself several months ago. More recently, one participant, by the name of “Moose”, has recorded that the material can be extracted by a forced squeeze of the skin surrounding the orange spots. The extended curiosity of this particular researcher is appreciated, and I have been able to easily confirm his results. As he states, the fluorescent material extends beneath the surface of the skin layer, and apparently the nasal oils are permeated at depth with the unusual color.

It has been suggested by many of these observers that this unnaturally bright fluorescent orange color may be a biological marker of some sort. I am not aware of any historical record of bright fluorescent orange spots on the facial area of the human species. As such, the question of a biological marker being used without an individual’s knowledge presents itself as a reasonable claim to investigate.

Two micro-photographs of this extracted material will be presented on this page. The materials shown are oils of the nasal area removed as described above. Magnification of the images is at 60x. An image is also presented under the microscope under ultra-violet light. The ultra-violet light available for microscopy is insufficiently bright to reveal the bright orange color of the material, however, the fluorescent nature of it can be seen. The bright orange color is easily visible to the naked eye under ultra-violet light. While it is understood that these micro-photographs may not be especially visually appealing, they are presented in the broader context of the goal aimed at the scientific explanation of the observations recorded.

It would be beneficial for anyone with adequate knowledge in the health professions to explain what is being recorded by numerous observers that have had the motivation to investigate this phenomenon. It would also be helpful for anyone with laboratory resources to identify the source of the bright orange color that is commonly being reported and observed. Any comments regarding this research question can be posted publicly on the message board attached to www.carnicom.com, or email can be sent to info@carnicominstitute.org.

The observations described and recorded can be investigated by naked eye observation from anyone with access to ultra-violet light (e.,g. a blacklight). Please also refer to the numerous posts on this subject by many interested parties on the message board attached to www.carnicom.com, especially under the Physical Samples Research forum topic. 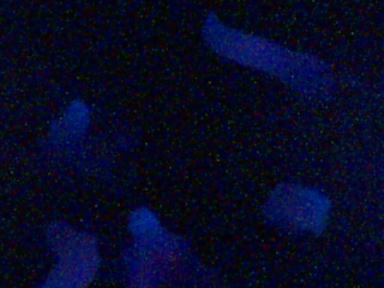