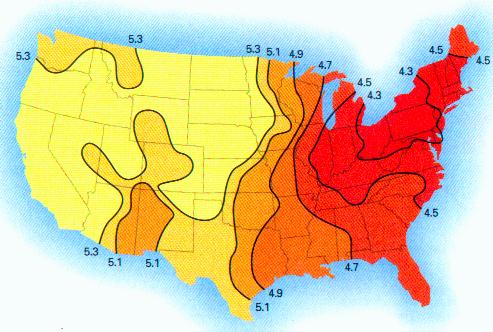 Indications that significant alterations in atmospheric chemistry may have occurred as a result of aerosol operations are now more strongly confirmed. There is a need for citizens across the country to conduct pH tests of local rainwater; this can be accomplished both easily and inexpensively. For those unfamiliar with pH values, this is a scale of acidity and alkalinity. The scale ranges from 1 to 14, with 1.0 being extremely acidic and 14.0 being extremely alkaline. Pure water has a pH value of 7.0 It has been confirmed by a most reliable source that the pH of rainwater is expected to be at 5.6 or less.

Lines of equal pH in the United States 1990
from Atmosphere, Climate and Change by Graedel and Crutzen 1997
(“The levels below 5.0 east of the Mississippi River are the result of
anthropogenic [man-made] emissions of sulfur and nitrogen oxides.“)

Measured values in the Santa Fe area of several samples average at 6.5. The difference of these samples from the expected norm is statistically significant at the 99.9% level. It is important for other parties to verify or refute these observations that have been made. pH testing of rainwater has now become an important tool in identifying important changes that have recently occurred within the chemistry of our atmosphere, and tests from other locations are needed.

In addition to the two sources identified within a previous article that have established a baseline value for rainwater pH, the following source has now confirmed the stated value of approximately 5.6.

In the book entitled Atmosphere, Climate and Change, by Thomas Graedel and Paul Crutzen (winner of the 1995 Nobel Prize for chemistry), it is stated within this Scientific American publication that “The single most important chemical species in clouds is the hydrogen ion (H+), whose concentration can be indicated by specifying the solution’s acidity, or pH value.”

In addition, it is confirmed that the acidic nature of rainwater results from the combination of the water with carbon dioxide, forming carbonic acid, which is acidic. The gas concentration of CO2 produces atmospheric droplets of pH approximately 5.6. In fact, most rain is expected to have a pH of less than 5.6, due to combinations with both natural and man-made nitrogen and sulfur compounds.

The results of the initial local testing in southern Santa Fe are as follows:

The average of these tests is 6.46, with a sample standard deviation of 0.19. Collectable rainwater has become an extremely rare commodity in southern Santa Fe, NM since October of 1999, as a result of the serious drought in this area. Values of 6.5 indicate a much higher level of hydroxide ions (OH-) in the atmosphere than are expected. Please also refer to A Case For Testing within this web site for more information on this aspect.

The chart above shows what the pH values across the country were in 1990. Significant deviations from these values indicate that a significant alteration in atmospheric chemistry has likely taken place.

pH test kits can be purchased inexpensively at most aquarium, pet or department stores. A specific product that has been used is manufactured by Aquarium Pharmaceuticals called “Deluxe pH Test Kit”. This test kit will measure pH values from 6.0 to 7.6 incrementally. Values equal to, greater than or less than the extremes can be inferred if the end of the scale is reached.

Readers are highly encouraged to conduct such pH tests with local rainwaters, and to post the results on the message board attached to this web site. Test results can also be sent directly to info@carnicominstitute.org. It is important to state the location or state that the test was conducted within, due to the variability which is shown in the graphic above. The test results will be used to add to the information and research databases that are being developed on this issue.