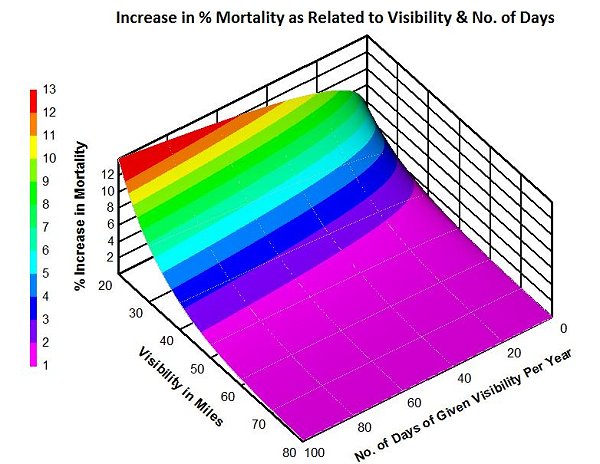 A preliminary empirical model has been developed to estimate the impact of diminished visibility and fine particulate pollution upon mortality rates.  The model is a synthesis between an analysis of measured pollution levels (PM 2.5), observed visibility levels and published increased mortality estimates.  The model is based, in part, upon previous investigations as published in the paper “The Obscuration of Health Hazards : An Analysis of EPA Air Quality Standards“, Mar 2016.

Air pollution has many consequences.  One of the simplest of these consequences to understand is that of mortality and the degradation of health.  It would be prudent for each of us to be aware of the sources of pollution in the atmosphere, and their subsequent effects upon our well being.  Measurement, monitoring and auditing of airborne pollution is within range of the general public, and the role of the citizens to participate in these actions is of increased imperative.  The role of public service agencies to act on behalf of public health needs and interests has not been fulfilled and we must all understand and react to the consequences of that neglect.

This particular model places the emphasis upon what can be directly observed with no special means, and that is the visibility of the surrounding sky.  Visibility levels are a direct reflection of the particulate matter that is in the atmosphere, and relations between what can be seen (or not seen, for that matter) and the concentration of pollution in the atmosphere can be established.  The relationships are observable, verifiable and are well known for their impacts upon human health, including that of mortality.

All models are idealized representations of reality.  Regardless of variations in the modeling process, it can be confidently asserted that there are direct physical relationships between particulate matter in the atmosphere, the state of visibility, and your health.   There are, of course, many other relationships of supreme importance, but the objective of this article is a simple one.  It is : to look, to be aware of your surroundings, to think, to act, and to participate. The luxuries and damage from perpetual ignorance can not be dismissed or excused.

The call for awareness is a fairly simple one here.  I encourage you to become engaged;  if for nothing else than the sake of your own health.  When this has been achieved, you are in a position of strength to help others and to improve our world.  This generation has no right or privilege to deny the depths of nature to those that will follow us. 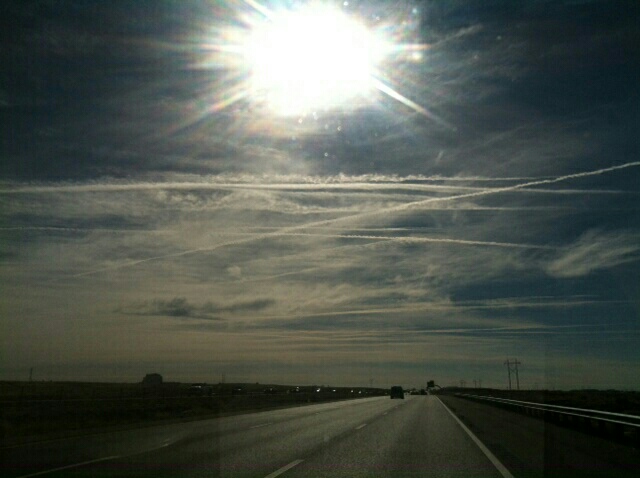 Models are one thing, real life is another.  It is time to assume your place.