The following sample requires identification. Those with further knowledge in microbiology are encouraged to respond. If any readers believe that they are able to identify the following materials, please respond with email to info@carnicominstitute.org or post a public message on the message board. Thank you.

The following message was received along with the physical sample:

“Found this on 5 different locations on our 1 acre area after a jet ‘took’ the roof loose. Hope you can find out what it is. Grass died.” 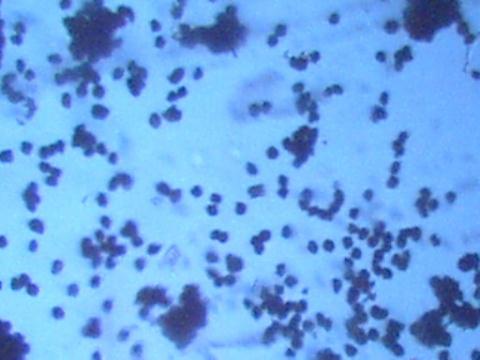 The objects are shown at a magnification of approximately 480. The material is of dark brown color, and is of a powder form. Microscopic evaluation shows the material to be composed entirely of uniform spherical cellular structures. The cells measure an average of approximately 7 microns in diameter. Although there is a blue cast to the microphotographs shown, the material itself is dark brown to black. The best estimate that I am able to make of this material thus far is that it appears to be in the class of fungal or bacterial spores. Any further identifying information from the readership is appreciated. 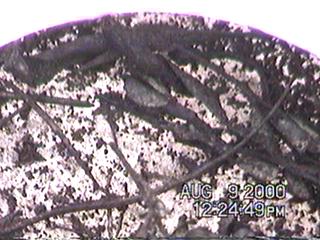 The above two photographs show views of the material in the original container in which it was received. The container is filled with dried vegetation coated with the dark powder, and the material on the bottom of the container is the powder by itself. The material also has an extremely offensive odor. There is also the possibility that contact with this material leads to fatique, but this last observation remains to be verified. No confirmation is available at this time that the material originated from either the air or the ground; the only information currently available is the statement from the sender that is posted above.

The closest match with research thus far has been obtained from the following web site:

which posts the following image and description. A general match both visually and with size is occurring with this particular order of fungal spores. Results of other researchers remains welcome.

“Smuts (Order Ustilaginales)
The class Ustomycetes is represented by a single order, the Ustilaginales. The
members of this order can produce a yeast-like unicellular stage. The vast
majority of the members of Ustilaginales are plant parasites. These fungi are
called smut fungi and number around 850 species which form dark spore masses
on host plants, such as grasses and cereal crops. Smuts can be found on many grasses,
especially on Johnson grass when it first flowers. Spores of Ustilago (illustrated) and
Tilletia are frequently seen.
Their spore size ranges from 5 to 10 micrometres (microns).”

The following microphotographs are now presented at a magnification at approximately 2400x. Although any detail of the images is lost at this point, these photographs do reveal the irregular shape of the objects at high magnification. The degree to which the Order Ustilaginales is spherical remains an open question from the image that is available for comparison. 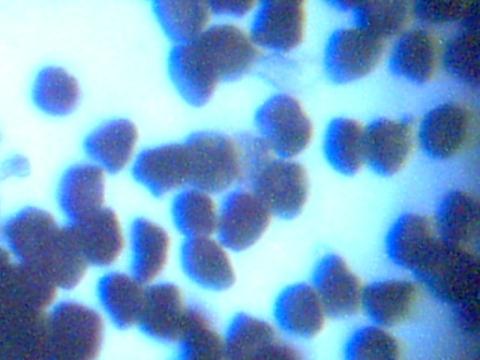 The following message apparently authored by a Jay Reynolds was relayed to me by email on August 12 2000:

“In 1996, Karnal bunt of wheat, caused by the SMUT fungus Tilletia indica, resulted in the quarantine of 1.7 million
acres of wheat including the entire state of Arizona, and portions of NEW MEXICO and Texas. USDA called this outbreak an “extraordinary emergency”. Even one spore of this SMUT was enough to restrict all movement of possibly infected material from these areas. Economic damage resulted and was eventually compensated by US taxpayers.

Karnal Bunt is a heterothallic SMUT fungus belonging to the order USTILAGINALIS. The black, globose to
subglobose teliospores are the part of the pathogen that give this group of organisms the designation SMUTS.
These spores are known to remain viable for 2-5 years.

in the Code of Federal Regulations, 7 CFR 301.89-1 through 301.89-14, which should be carefully studied by
Carnicom and anyone else who attempts interstate transport of material which could be infected with SMUT
organisms and spores.

Such transportation could be a violation of Federal and State laws, and be to the detriment of farmers
everywhere.

I urge Carnicom to have the spores that he claims were sent to him immediately identified by his State
department of Agriculture who are very able to identify the spores he has in his posession.

Unfortunately, his policy of censorship negates the possibility that I can direct this information to him personally,
if someone is able, please pass it along.

My response by email to the party that relayed the above information is as follows:

Thanks for this info. I do not keep track of Jay Reynolds or his activity in any way, so this is helpful information. I most likely will indeed post this on my site, and take the advice of requesting further identification beyond my public appeal. One might think the state or federal authorities should have an interest in contacting me if my initial identification is indeed correct. Identification of and locating the source of the material are the primary goals, regardless of how that is accomplished.