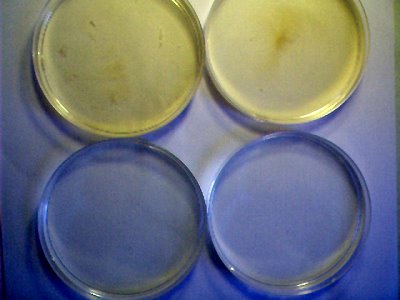 The growth of the bacterial-like organisms that appear to be at the foundation of the so-called Morgellons condition has been positively inhibited. That is the discussion included at this juncture. Clifford Carnicom recognized in a previous work (see the paper titled ”MORGELLONS: A DISCOVERY AND A PROPOSAL” dated February 22, 2010) that these organism(s) thrive in an acidic environment in the presence of an hydroxyl radical and oxidizers in general, and that application of a set of specific antioxidants inhibit the growth of the organism(s) in the presence of the hydroxyl free radical and the creation of a more alkaline environment. Detailed images of the testing performed by Carnicom in this experiment show side by side comparisons of both an inhibited culture growth of the chlamydia-like organism referenced and researched in many of Carnicom's papers, and those of an uninhibited growth. Note that the inhibited culture was subjected to the presence of three specific hydroxyl scavenging antioxidants at the beginning of the trial.  The specific antioxidants being used are that of ascorbic acid, sodium citrate and glycerol. The reasoning behind choosing these specific antioxidants is outlined in the above mentioned Carnicom paper.