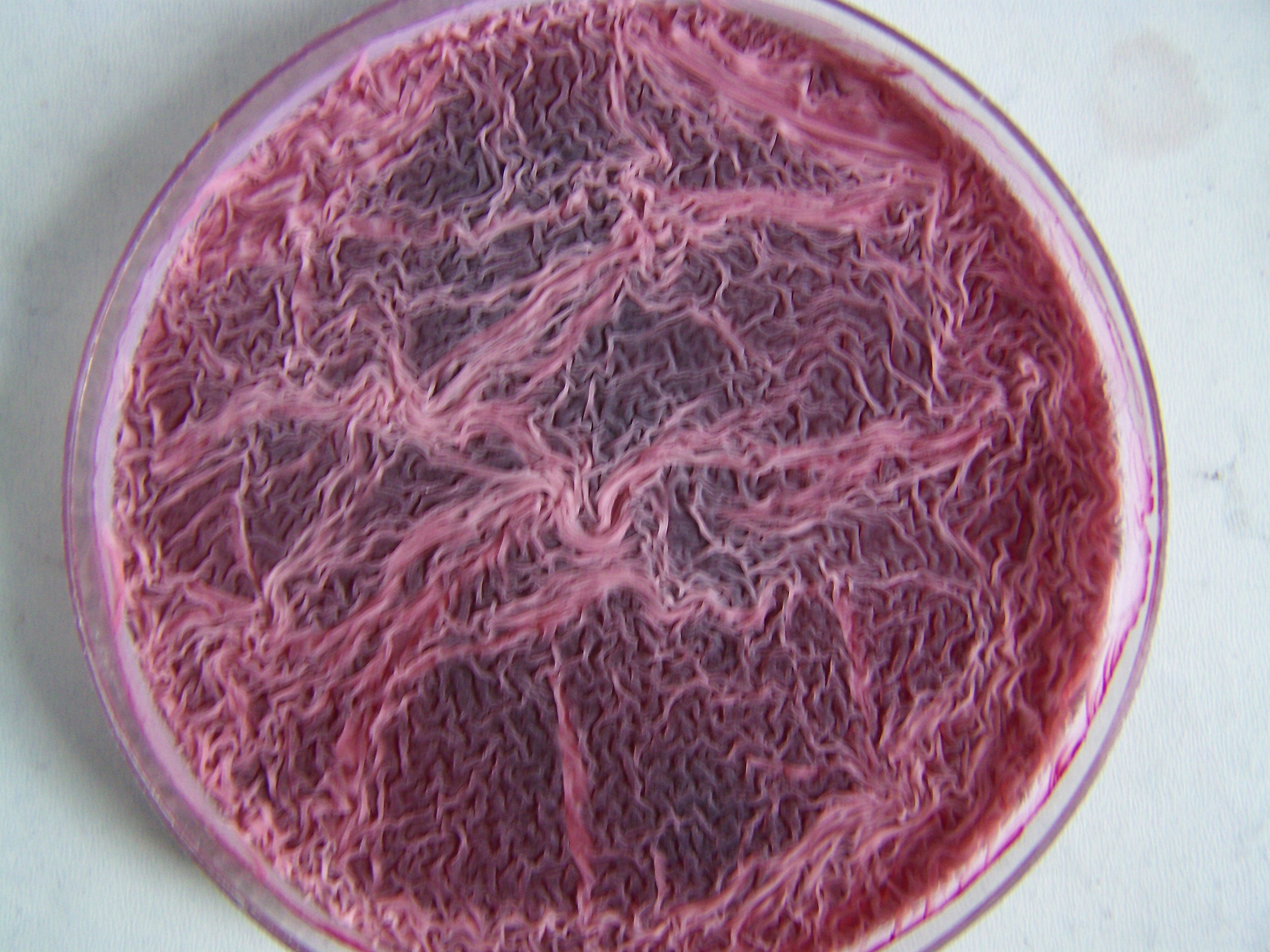 A new, or modified, form of cultured growth has been developed from human oral filament samples that are characteristic of the so-called “Morgellons” condition.  Three unique features characterize this particular filament type of culture growth:

1. The growth rate is explosive, transforming itself from a film layer to a dense sheet of filaments as shown below within a 24 hour period.

2.  The growth type, and/or the growth rate, appears to be dependent upon the introduction of a specific visible light frequency range into the culture process.

3. The size, i.e., diameter, of the “filaments” is much greater than that previously studied in detail on this site.

The photographs from the laboratory session will now be described in greater detail below:

The new, or modified, filament growth culture that has developed.  The origin of the culture is a human oral filament sample.  The culture medium is red wine. The bulk of the growth that is shown here occurred within a 24 hour period, with an incubation period of approximately 5 to 7 days. The only known variation in the culturing process, relative to previous culture work over recent years, is subjecting the culture to a specific frequency range of visible light.  The frequency (blue light) has been chosen as a result of spectral analyses that have recently been conducted and reported on in this site.

One of the more important findings of this current research is that the application of certain frequencies, or their harmonics, may play a highly significant role in the various manifestations that the underlying “organism” may assume.  This may act in a highly detrimental fashion to the host; in this case, the human being.  The rate of growth of the organism under the conditions investigated here may also seriously hinder any efforts to mitigate or inhibit its influence within the human body.  The research also points out the extreme risks that may exist in “experimenting” with the use of frequency protocols without proper controls and without knowledge of the underlying physiological and physical processes involved.

As one example of consideration, the speed of an electromagnetic wave within the body is a variable and therefore any frequency or its harmonic that is under consideration is also expected to vary by target location. The discovery reported here adds a new layer of complexity to the research that has been discussed on this site. 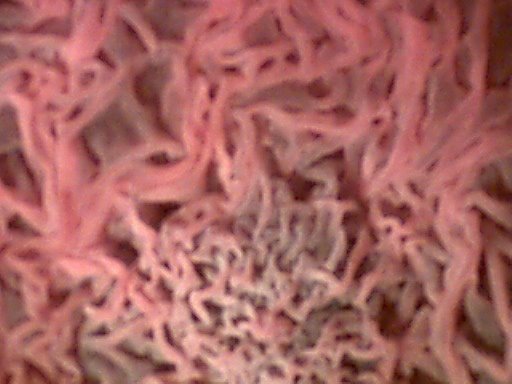 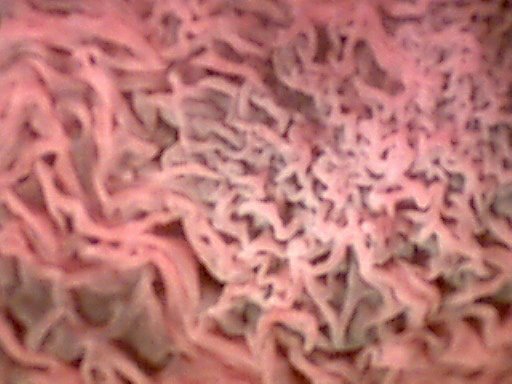 A close-up view of the modified growth form that has been developed. The growth rate of this form is remarkable and the topology of the culture is quite complex under higher magnification.   At this point, no additional information on the internal nature of the growth is known.  Additional microscopic and spectral analyses will need to be conducted in the future to determine if there is correspondence with previous growth forms that have been analyzed in detail. The circumstances of growth are identical to that of previous work, i.e., the introduction of human oral filament samples within a red wine base; what differs is the illumination of the petri culture dishes with light of a specific frequency chosen from earlier absorption analysis. It will be noticed that a strong and sharp absorption peak at approximately 375 nanometers (nm) has been identified in the previous report; this corresponds to the blue portion of the visible light spectrum. Tentative work some months past involving the use of this frequency range was applied and observed effects upon culture growth were observed.  As a result of the more exact, detailed and verified spectral analysis of recent weeks, the determination of the influence of this frequency has been pursued with greater vigor.  Magnification 10x. 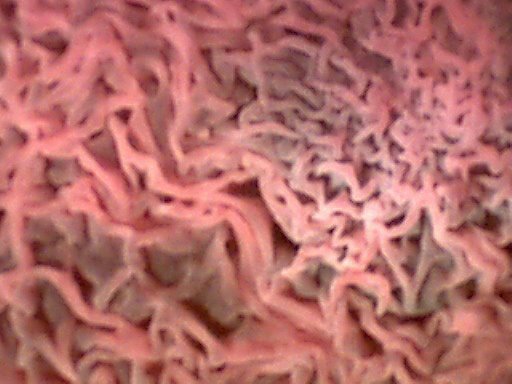 Another close-up view of the modified growth form that has been developed.  To find a commercially available source at the appropriate wavelength of approximately 375 nanometers, it is found that an “actinic” lamp is sufficiently close to merit application. Actinic fluorescent lamps are commonly available for aquarium lighting, as they reproduce the light range that is suitable for coral growth.  Notice the absorption spectrum presented remains sufficiently pronounced and localized to accommodate the 420 nm wavelength; practice has shown that a measurable effect is apparent with its use. Magnification 10x. 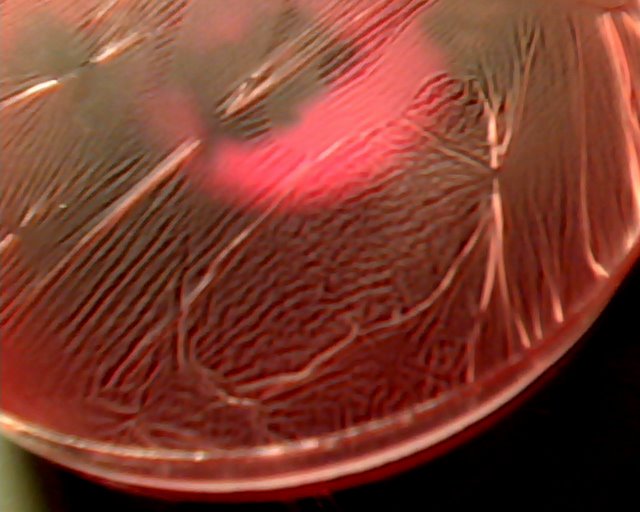 A photograph of the sheen, or film-like layer that develops on the wine culture surface immediately prior to the explosive growth stage that takes place. The early stages of folding and rippling of the surface can be seen.  The incubation period to reach this stage is approximately 5 days under the current environmental conditions established.  Growth is then extremely rapid, and envelops the entire surface of the dish with filaments as shown above within a 24 hour period.  One of the effects that appears to result from the use of the actinic lamp is a very sharp increase in the rate of the culture growths in general.  The cultures in the past have usually required several weeks to even several months to develop; all cultures under examination in this report have produced visible results within a week of time.  The central lighted region of the dish is the light stage of the microscope underneath the culture dish. 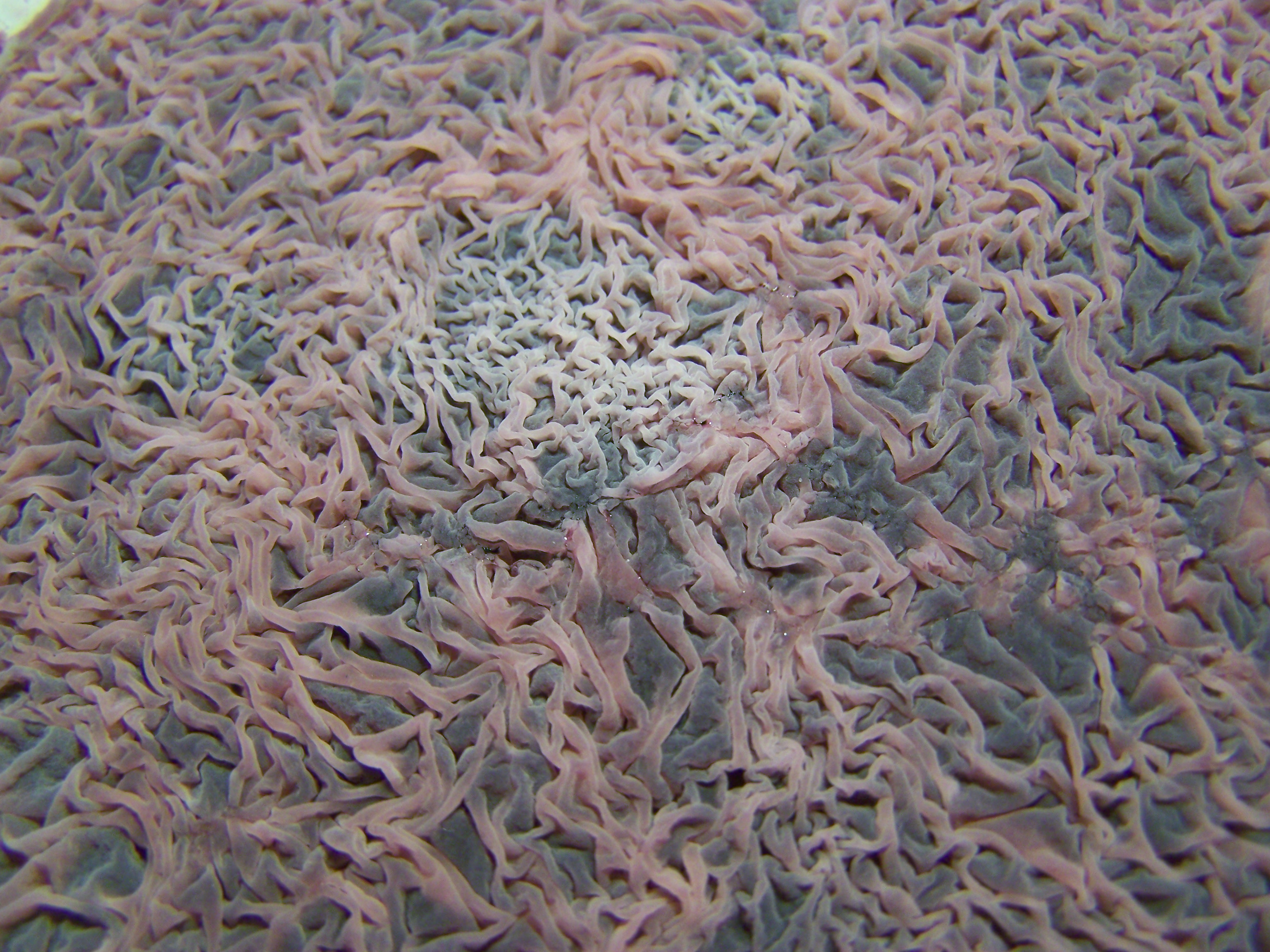 Another close-up view of the modified growth form that has been developed
Magnification approximately 3x. 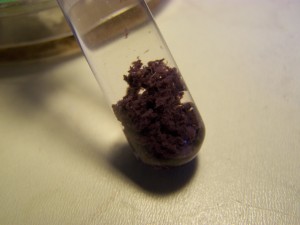 An oral filament sample that has been isolated from the red wine extraction fluid.  This isolation occurs by a process of decanting and dilution, and is relatively pure in this state within water.  Notice the color of the wine is absorbed by the materials.  This sample material provides the basis for further culture work and spectral analysis. 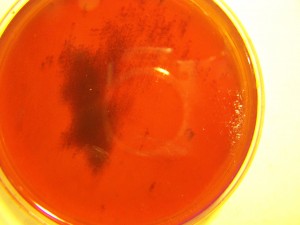 The test tube filament sample, as shown in the previous photograph, can be used to generate further cultures and to conduct spectral analyses. One method of preparing a culture is to simply place the material within red wine as a culture medium. This is the method used in setting up the culture dishes shown earlier in this report. Another method of preparing the sample for further analysis is to heat it (to the boiling point) within a lye (sodium hydroxide) solution. The advantage of this method is that it appears to be reasonably successful in breaking down the exterior casing of the filament and allows for examination of the internal components. It also allows for extraction of the more fundamental(interior) components for use in the culture process. 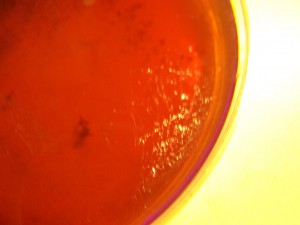 The images that are shown in this set are a product of the heat and lye degradation process. This allows for extraction of the chlamydia-archaea-bacterial like component that resides within the filament structure. It therefore allows for examination of culture development at a more primitive, or base, level. In addition, these cultures in a red wine solution have been modified with the weak addition of iron sulfate and hydrogen peroxide. It has been found that these additions accelerate the growth rate of the cultures as has been described previously. The hydroxyl radical appears to be a significant fact in this increased growth rate. There is very good reason to believe that the “organism” can use both iron and calcium for its sustenance; this will have to be elaborated upon in later reports. In addition, the introduction of the blue wavelength light appears to be an additional accelerating factor in the culture growth rate. The section reflecting light on the right side of the petri dish is a young network of filaments that are beginning to form within the culture. 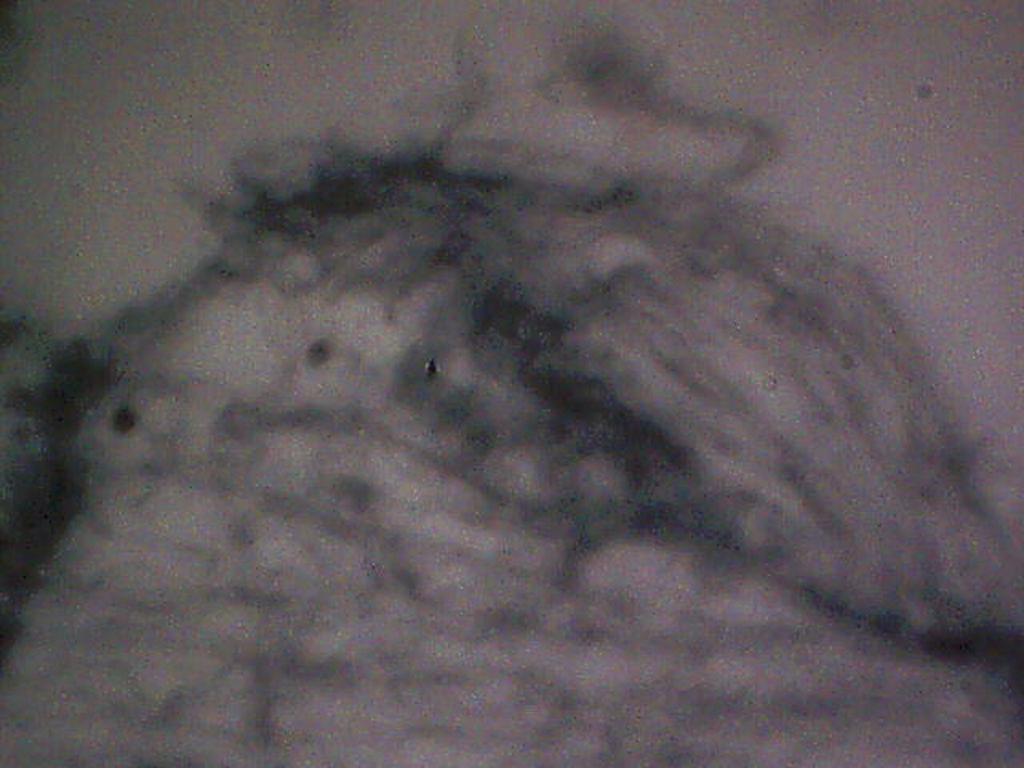 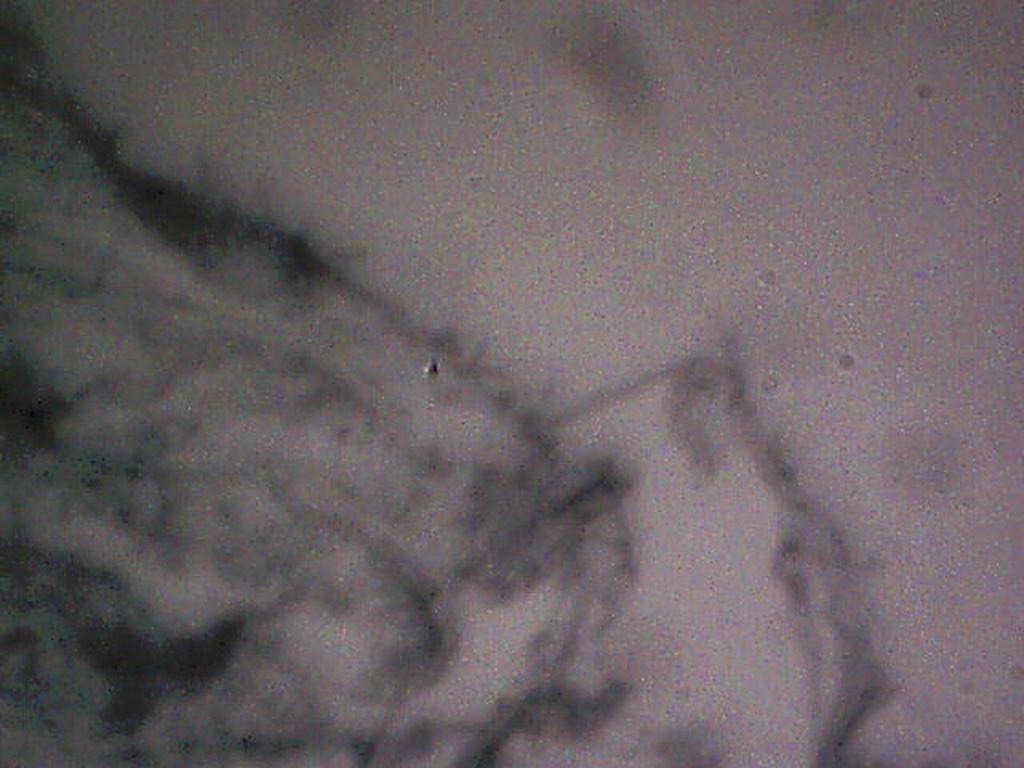 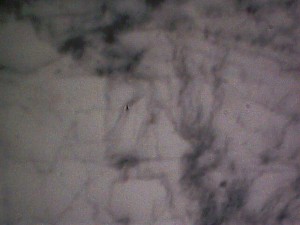 This final section of photographs is a close-up of the young filament network referred to in the previous photograph on the right side of the set.  The photograph is taken at the surface level of the wine solution.  The individual filaments of the emerging network can be identified.  The use of accelerating factors in the growth rate of the cultures with the use of Fenton’s reaction and blue light appears to offer significant benefits in the turnover rate for future culture research.  In the past, the development of the filament network can take weeks to even months to develop; in the case of this report all culture developments have taken place within a week of time.  Magnification is estimated at approximately 100x.