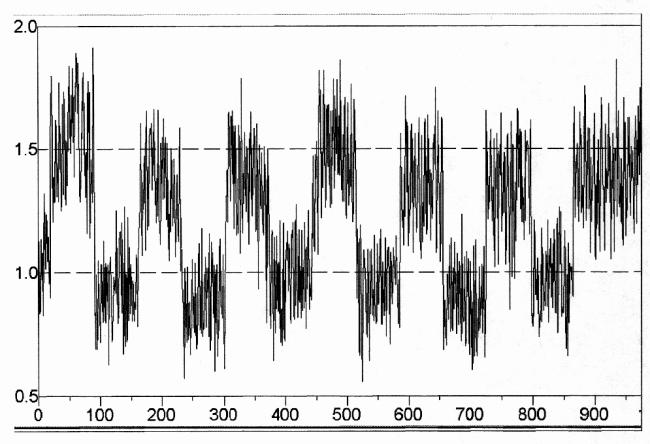 A third significant pattern in the ELF  (Extremely Low Frequency) to VLF (Very Low Frequency) portion of the electromagnetic spectrum has now been observed and recorded.  The pattern is one of a series of higher frequencies followed by a series of lower frequencies, with a period of approximately 60 – 100 secs for each group of pulses.  There is no known local or residential origin for these signals, and they are to be regarded at the same level of interest as the ELF signals that have now been recorded on multiple occasions.

The current VLF observations are significant in that they are not continuously occurring; three segments of approximately 15 minutes duration each were observed on Mar 03 2003.  The switching and pulse nature of the observations abruptly ceases and starts, as is shown on the graph which follows on this page.  There is no gradual transition between the different phases, and the variation in frequencies appears to be the direct result of a constructed modulation system.

It is also significant to report that a developed electronic digital logging magnetometer operating at this site recorded anomalous magnetic readings during this same time period.  More information on the magnetometer will be reported at a later date, however, the readings were some of the more unusual that have been observed in over a month of recording time.  It is therefore quite possible that the signal structure shown on these pages will be more difficult to capture than the ELF patterns (4Hz multiples) that have been reported on a continuous basis.  The viewing of the frequency pattern shown on this page can be regarded as the result of fortuitous and unusual circumstances, and it may require greater patience to replicate these results.  This is due to the fact that this pattern does not appear to be a continuous process by any means.  Unusual readings on the magnetometer may serve as a useful indicator as to when such pulses are present.  Three such periods, each approximately 15 minutes long, occurred on today’s date simultaneously with the unusual magnetometer readings.

The observations were collected with the use of the ELF meter that has been described elsewhere on this site.  An external wire antenna approximately 5 feet long was used on this occasion. The potentiometers within that circuit allow the sensitivity or gain of the circuit to be adjusted.  The second potentiometer can be regarded as a coarse tuner, and the first potentiometer as a fine tuner.  Lower settings on both potentiometers permit the 4Hz multiple cycle detection (the lower multiples within a residential environment), higher settings permit the detection of the 60Hz power signal (if required) and still higher settings permit detections within the VLF portion of the spectrum.   Many variable combinations of sensitivity exist.  The circuit was set for approximately 1kHz at the time of these readings. It is the variations within the kilohertz portion of the spectrum that are deserving of attention at this stage of research; the magnitude is not given special significance at this time.  Until the nature of the pulses shown above is determined, it may be that these variations are detectable across a fairly broad range of frequencies.

Indications are that this pattern of pulses in the VLF range may also be observable at a more distant location.  This will be reported at a later time if and when additional data becomes available.

It is hoped that other citizens will begin the process of circuit construction ( and modification and improvement) to examine the findings that have been reported on this site during the last few months.  It is in the interest of the general health of the population that such testing occur.