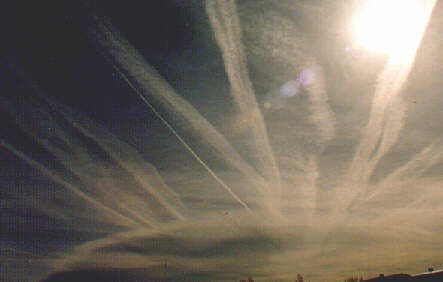 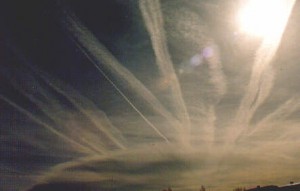 On April 18, 1999, the most egregious contrail (aerosol) crimes thus far this year were placed into the Santa Fe skies. This photograph was taken at the height of the onslaught at approximately 0930, and at this very same time a telephone call was placed to the Federal Aviation Administration control tower at the Santa Fe airport. I inquired what was the Federal Aviation Administration’s explanation for what was occurring in the skies directly over our heads, as witnessed by this photograph. The control tower spokesperson paused approximately 5-7 seconds, and then stated that “there was nothing unusual going on in the sky at this time.” I contradicted this spokesperson, and affirmed that it was, in fact, quite unusual. The tower paused briefly, and stated again that he did not know of anything out of the ordinary taking place.

I declare that the above statements by the local control tower in Santa Fe, NM, are in fact, lies. It is our duty as citizens to force this issue to its eventual truthful disclosure and subsequent termination.