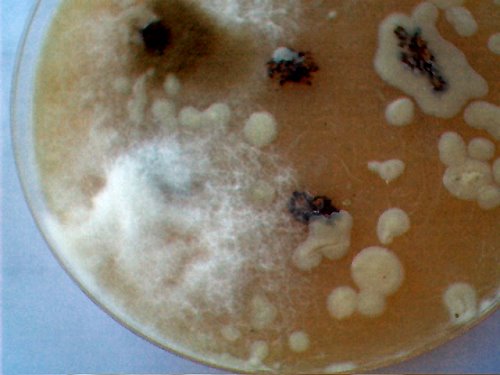 I have no medical expertise and I claim none.  I am not offering any medical advice or diagnosis with the presentation of this information.  I am acting solely as an independent researcher providing the results of extended observation and analysis of unusual biological conditions that are evident.  This paper is, nevertheless, provocative in its intent.

Work has been conducted over the past one to two months that appears to be important and it may have significant impact.  It appears as though a primary pathogenic form under evaluation that is assocated with the so-called “Morgellons” condition may have been successfully cultured.  If this proves to be the case, it offers the potential to begin very serious research on the methods to control, inhibit, reduce or eliminate the pathogenic forms within the human body.  My opportunities to conduct such research are quite limited due to additional demands, and this information is offered for the public benefit so that this process can begin without delay.  I will continue to do what I can.  Unknown pathogens are difficult to identify, treat and remove if they exist only within the body; there is tremendous benefit if such pathogens can be grown or developed in a culture medium under controlled conditions.  This report may offer a pathway to that process.

There can be no excuse at this point by anyone for the failure to conduct the necessary research that this report prompts.  The responsibility for this action and any potential progress from it now rests with each of us.

Before continuing, let us briefly summarize salient findings by this researcher over the past couple of years on the “Morgellons” and Aerosol issues; the basis for these statements will be found within the body of research that exists on this site:

1. Five recurring, specific identical physical forms, all apparently of a pathogenic nature, are under continuous identification across the major systems of the human body.  These include:

a) A bounding,or encasing, filament form, approximately 12-20 microns in thickness.
b) A sub-micron network of filaments within the bounding filament.
c) Sub-micron oblate to spherical structures, potentially identiable as a Chlamydia pneumoniae intra-cellurlar bacterial form.
d) A “hybrid” from, usually of a ribbon-like nature.  Mycoplasma (pleoforms) have been suggested as a topic for further research with this item.
e) A “budding” form, which appears to emerge from the encasing filament, which further contains both items b and c on this list.

2. Airborne filament environmental samples have been matched, to the degree possible with available equipment, with items a, b, and c of Item 1 on this list.  The United States Environmental Protection Agency has refused to identify these airborne samples.

3. There has been no adequate or appropriate response, either by government, public or private resources to address the findings of Items 1 and 2 for approximately 10 years.  The aerosol issue emerged as a controversial topic at approximately that same time, to be followed gradually over the following years with the emergence of the “Morgellons ” issue as another controversial topic.  There is now sufficient evidence to consider the aerosol issue and the Morgellon’s issue as linked with the common denominators of physical form and delivery method.  The EPA and the Center for Disease Control(CDC) are both culpable in this regard, along with other public service agencies.

4. The perception that the “Morgellon’s issue affects a only a relatively small group of individuals appears to be patently false, based upon the findings of this researcher.  The skin symptoms (lesions, filaments, etc.) that are often called to attention as evidence of the condition appear to be only one restricted manifestation of more general conditions that appear to affect the entire population.  Any individual that has provided biological samples(blood, dental) for observation demonstrates, to some degree, the pathogenic forms listed in Item 1.  To date, no individual is exempt from this assessment.  It is repeated that I am providing no medical diagnosis or determination with this statement; it is simply a point of fact of observation from this researcher.

5. The “dental test”, as reported on this site, continues to be a viable form of production of biological samples for further study.  Such samples form the basis for this report.  The filament dental form has been produced, thus far, by any and all individuals that have participated in the testing process.  Some individuals have now been conducting this test for several months on a daily basis; there remains a continuous daily production of the filaments from the dental region of these individuals.  There is no known exception to this statement as this time; if and when it is found it will be stated as such.  Continuous gratitude and recognition is given to Gwen Scott, N.D. for the discovery and development of this test method; it exists as a crucial link in the subsequent work outlined in this report.  The connections that have been made are a good example of how research often requires collaborative effort and resources, especially as the complexity of the situation increases.  The aerosol and “Morgellons” issues have been deliberately constrained in progress due to their covert natures, and the work is years behind the state of healing that is eventually required.

6. The majority of the information on this page is available through various modifications that have been made to conventional microscopy equipment.  The relatively high magnifications that have been achieved permit the detection of structure and form that would otherwise be invisible with conventional equipment.  Cumulative image processing techniques have also been used to improve structure determination. 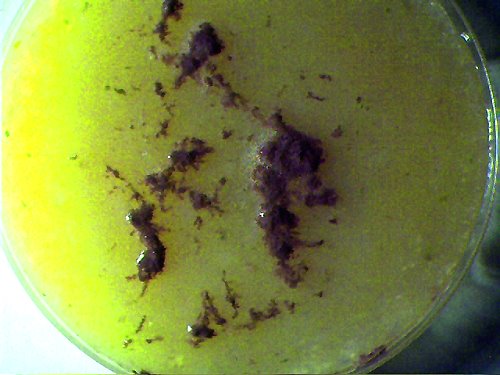 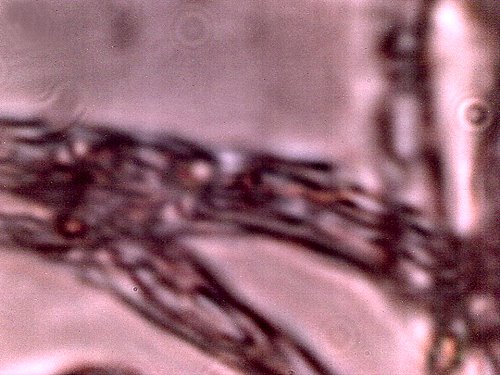 Original  dental  sample under the modified microscope.  Additional dental filament sample microphotographs
are available on this site; uniformity of structure, size and form is apparent.
This is to be considered as the “primary pathogenic form” for the purposes of this report..
Magnification approx. 7000x. 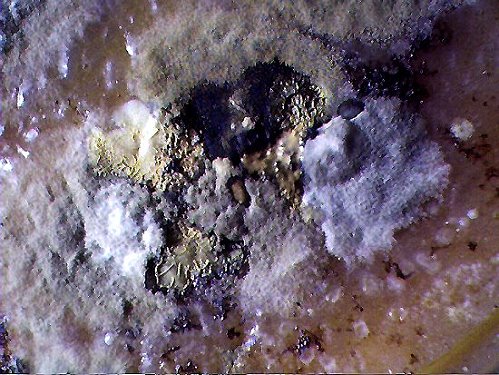 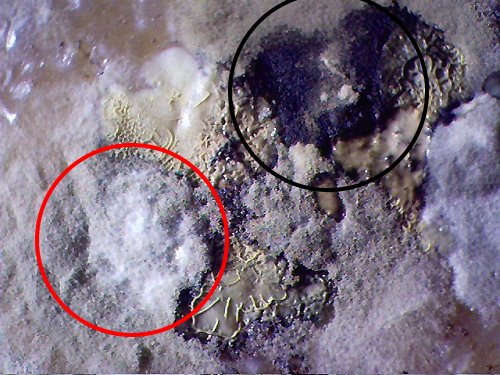 Close-up of pathogenic forms that appear on the filament dental samples on the
agar culture medium after approximately two weeks of development.
The black circle encloses what appears to be a black mold species(Stachybotrys?)
Numerous species of fungi and bacteria develop from the dental samples on the agar medium.
The red circle encloses what appears to a separate genesis of the “primary pathogenic form“,
i.e., the subject of this report.  Magnification approx. 8x. 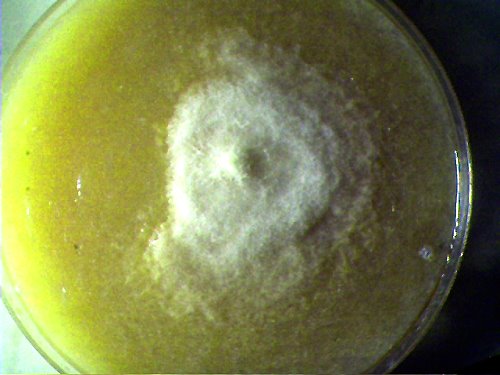 Isolated culture developed from the pathogens that have developed from the dental filament samples.
This filament culture appears, under high magnification,  to be absolutely equivalent to the “primary pathogenic form“,
i.e, the dental filament form shown at the beginning of this report.  This pathogen grows freely, broadly
and quickly upon the agar culture medium used here(beef bouillon). The culture is easily propagated from one
medium to another identical medium.  It remains unclear at this point what specific conditions are required to
create the culture form.  Time of development approximately 1 1/2 weeks.
No match found to an existing species at this time.   Magnification approx. 2x. 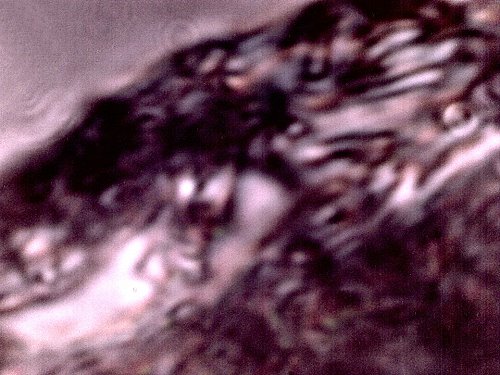 The filament  from the agar culture medium growth under high magnification.  It appears in all
major respects(size, structure, form) to be identical to the “primary pathogenic form.” (i.e., the dental sample).   Encasing filament, sub-micron filament network and sub-micron oblate/spherical structures are
each identifiable within this microphotograph.   This sample represents a growth on the culture medium
and it is not the original dental sample.  It appears that it develops from, and as a result of the dental filament sample.
If this proves to be the case, it represents a controlled development and duplication
of the primary pathogenic form.  Magnification approx. 7000x. 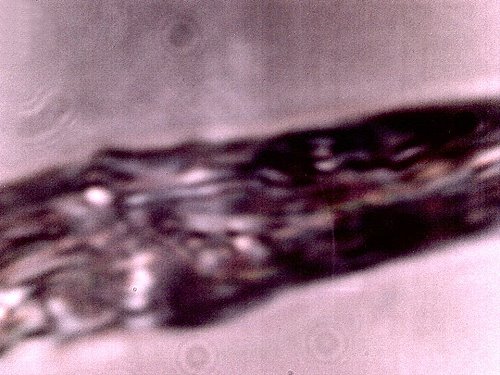 Additional microphotograph of the culture medium filament sample.
Similarity, if not identity, to the primary pathogenic form is apparent.
This pathogenic form has been identified in ALL humans that have
subjected themselves to the dental testing process.
Magnification approx. 7000x. 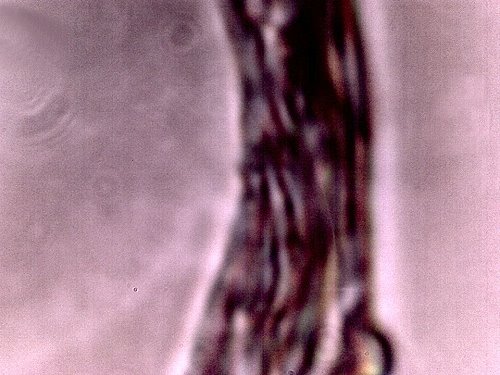 Additional microphotograph of the culture medium filament sample.
Similarity, if not identity, to the primary pathogenic form is apparent.
Magnification approx. 7000x.

Additional Photographs:
(to be captioned) 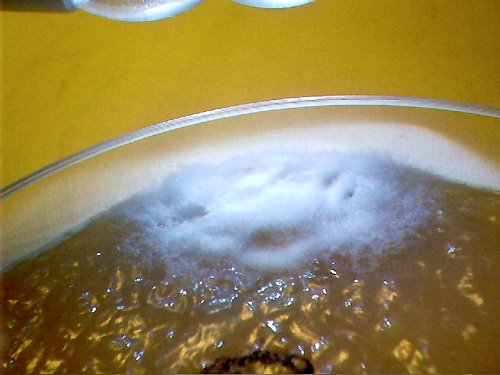 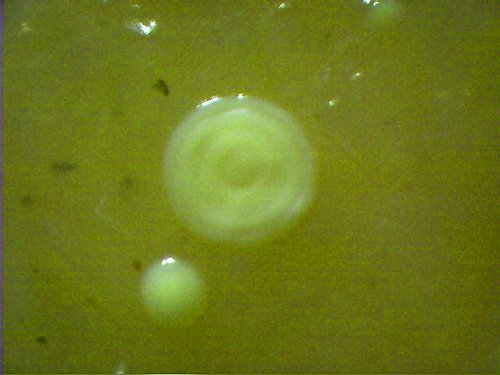