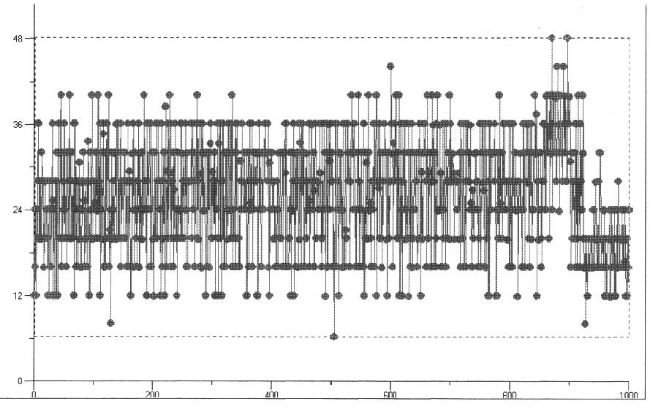 The presence of ambient Extremely Low Frequency Radiation (ELF) waves has again been verified.  This data has the remarkable property of being of geometric form, with the frequencies occurring almost exclusively as multiples of 4 Hz.  It appears reasonable to conclude that the frequencies being captured are likely of artificial design with an undeclared purpose.  The human brain operates primarily within the same range of frequencies that are repeatedly being recorded.  The graph above shows the unusual nature of this data; the Y axis of the graph shows the measured frequencies in Hz (cycles per second) and the Y axis shows the number of observations at one per second (total of 1000).  Each dot represents a single observation; the structure of the data is readily apparent.

The graph shows, therefore, ELF frequencies commonly being recorded at 12, 16, 20, 24. 28, 32, 36, and 40 cycles per second.  Previous research also shows that this frequency list minimally includes the additional frequencies of 2, 4 and 8 Hz.

The current work is the result of an original circuit that has been designed to detect ELF waves using a series of operational amplifiers in conjunction with a high inductance coil.  This circuit has developed from an original design project combined with certain experimental modifications during construction that have led to a device of extraordinary sensitivity.  The 60Hz signal from the power line infrastructure is easily detectable with this newer circuit.  The circuit is also sensitive enough to detect and register the electromagnetic presence of a person from several feet away from within the same room that the circuit is housed.

The specific source, intent and effect of these radiations remains unspecified at this time.  As a topic of additional research, it is well documented within the HAARP literature that ELF production that results from the pulsing of the ionosphere with high frequency radiation is an application of importance.  ELF propagation has the property of traversing extensive distances over the globe due to the extremely long wavelengths involved.  Earth penetration and subsurface communication applications are also major uses of ELF propagation.  The role of a modified atmosphere (refer to previous discussions on the plasma frequency) resulting from the introduction of massive amounts of electrically conductive particulate matter must be considered in conjunction with these disturbing findings.

Six significant effects or mechanisms of ELF radiation upon human health have been identified through initial research on this topic, including but not limited to:

The particular circuit that has been developed and that remains under investigation will be presented in detail at a later time when time permits.  The general conceptual design is that of a high inductance coil being used in conjunction with a series of operational amplifiers in combination with a frequency meter.

Although these frequencies have now been detected through three completely independent methods (two operational amplifier circuits and one coil-capacitor resonant circuit in combination with a gaussmeter), it has remained difficult to develop sufficient sensitivity to log the data reliably.

A most unexpected and unusual result of the current work is the role that the human being can assume in the detection of these frequencies. It has been found that the human organism, acting in conjunction with the primary large inductance coil (antenna) of the circuit, provides sufficient amplification to the signal to allow reliable detection and logging of the data.  That is to say, if a human runs a wire in parallel from the skin to the inductor lead, the geometric form of these frequencies is easily detected.  It appears, therefore, that the human being acts in some sort of resonant or amplification capacity with this particular circuit.  The effect upon health and or mental functions exists as a primary topic of inquiry. This research is in the early stages and will require additional investigation; it may be that alternative antennas may be able to provide this same result. The interplay between the human species, the dominant frequencies of the human brain, and the detection of this geometric form of ELF radiation would appear to be of much concern at this point.

Professionals knowledgeable in all fields related to these findings are again asked to contribute their services on behalf of the public welfare. Citizens are again asked to seek full accountability and disclosure on the issues that have been raised within this report.