It is now appropriate to disclose the circumstances involving a laboratory report on an airborne filament sample that was paid for in the year of 1999.  This report was issued jointly by three separate companies and they shall remain anonymous at this time.  It is now appropriate to present this information as the conclusions of the report are undeniably false.  Whether or not there was intent to misrepresent the facts of the case is not to be discussed in this paper; the purpose is to disclose information that is relevant to the public interest and welfare.  The laboratory was hired and paid significant monies to analyze and identify the very same airborne environmental filament sample that was sent to the United States Environmental Protection Agency (EPA) during this same time period of 1999-2000.  The failure of the EPA to identify that sample is adequately documented in this site.  This report will chronicle the events that surround this affair.

The circumstances are generally as follows:

1. A laboratory in the southwestern United States was privately contracted in the fall of 1999 to identify an airborne environmental filament sample.  The nature of this environmental filament has been discussed and researched extensively on this site over the subsequent years.  A portion of this same sample was sent to the EPA for identification as noted above.  The reason for contracting with the private company was because of the failure of the EPA to identify the material.

2. The laboratory report was issued in December of 1999 with joint responsibility of findings between three separate companies.  The report claims to use the results of infra-red spectroscopic analysis and Polarized Light Microscope Analysis on the sample.

3. The final statement of analysis from the contracting laboratory is as follows (names of laboratories redacted).  The conclusions of this report will be discussed in more detail below.

4. At the same time that the laboratory was conducting their tests, I also was conducting my own tests on this same sample material.  The results of that testing process are extensively reported on within this web site.  Certain primary conclusions were being reached on my side about the nature of the material such as size, chemical reactivity, microscopy results, conditions of collection and the like.  Prior to the results being officially released, we were given the subjective information above relaying that the material “could be” a “spider’s web”.  It was quite clear to me from my own analysis that the testing results were inadequate and inaccurate, as it was already evident that the material was not a “spider web”.  The final report claiming to use spectral analysis was then issued, and it was clear to me at this point that a contest of conclusions was in order.  It was equally obvious through any reasoned analysis that the material was likewise not a wool fiber or any other obvious fabric or textile.  Readers familiar with “counter arguments” of the period will also know that a commonly circulated theme by a relatively small group of vocal advocates was that the material was simply a “spider’s web that had fallen from the sky.”… There were also questions that had emerged from the spectral reports themselves.

5. At this point, it was obvious that a rather serious and important conflict of conclusions had developed.  The first conflict arose from the failure of the EPA to identify the material on behalf of the public interest.  The second conflict resulted from paid professional services that provided obvious and conflicting information to my own independent analysis of the material.

6.  A personal visit and meeting with the president of the issuing company was then arranged.  The meeting had three participants: the president of the company, Dave Peterson (a colleague of mine) and myself.  The subject of the meeting was identified ahead of time to all parties as a discussion of the conclusions that had been issued by the laboratory.  It is also a fact that the letter presented below was written by myself prior to the actual meeting and it was held in reserve until the outcome of the meeting was decided.  It is fair to say that I had serious concerns and issues with the professionalism and honesty of the science that was on display by the laboratory.

7. Prior to the meeting, in addition to the letter written and held below, I had also prepared a list of nine line items that substantiated, from my own analyses, why the laboratory results issued were false.  At the opening of the meeting, I expressed my concern that I had some reservations and conflicts with the validity of the report and that I would like to discuss them with him.  It is also true that the atmosphere of the meeting was generally one of unspoken tension and alertness.

8.  I began with my first item of nine on the list.  This issue was simply the point  and question of direct observation, especially under the microscope.  I told the president of the company that the materials did not even look like spider webs under the scope.  In my own analyses, I made extensive study of numerous filament, textiles, hairs and filaments in general, including those of spider webs.  I actually had the serious issue as to whether or not the sample had been properly observed, as it is the starting point of the scientific method.  The president of the company did not contest or agree with or discuss my point of contention in any fashion, there was at most a tacit or implied acknowledgment of this first of nine points.

9. I then proceeded to the second item on my list of nine.  This issue had to do with the size of the filaments.  The size of the filaments is micron to sub-micron in nature, and it does not correspond in any physical or possible way to a hair or a spider web.  My own measurements of spider webs were in the order of seven microns and hair is on the order of 60-100 microns.  The conclusion on the laboratory report simply had no justifiable metric basis.  I again wondered privately whether or not the laboratory had made the effort to even measure as well as look at the filament in any detail.

10. The next event in the meeting was entirely unexpected.  At the end of the second of nine points to be raised, the president of the company immediately halted the discussion and my speech.  The words that were uttered by this individual were the following:

“This meeting is now adjourned.”

11. There was nothing more that was allowed to be said.  The meeting was over as I had reached item two on my list of nine.  At this point, I personally handed the letter that I had written apriori to the President of this company.   Thirteen years later, it is now time to make this correspondence available to the public.  The letter could not be presented until a certain confidence in laboratory results was achieved; this is now in place.

12. The letter written at the time of the meeting in the year 2000 is presented below for the record: 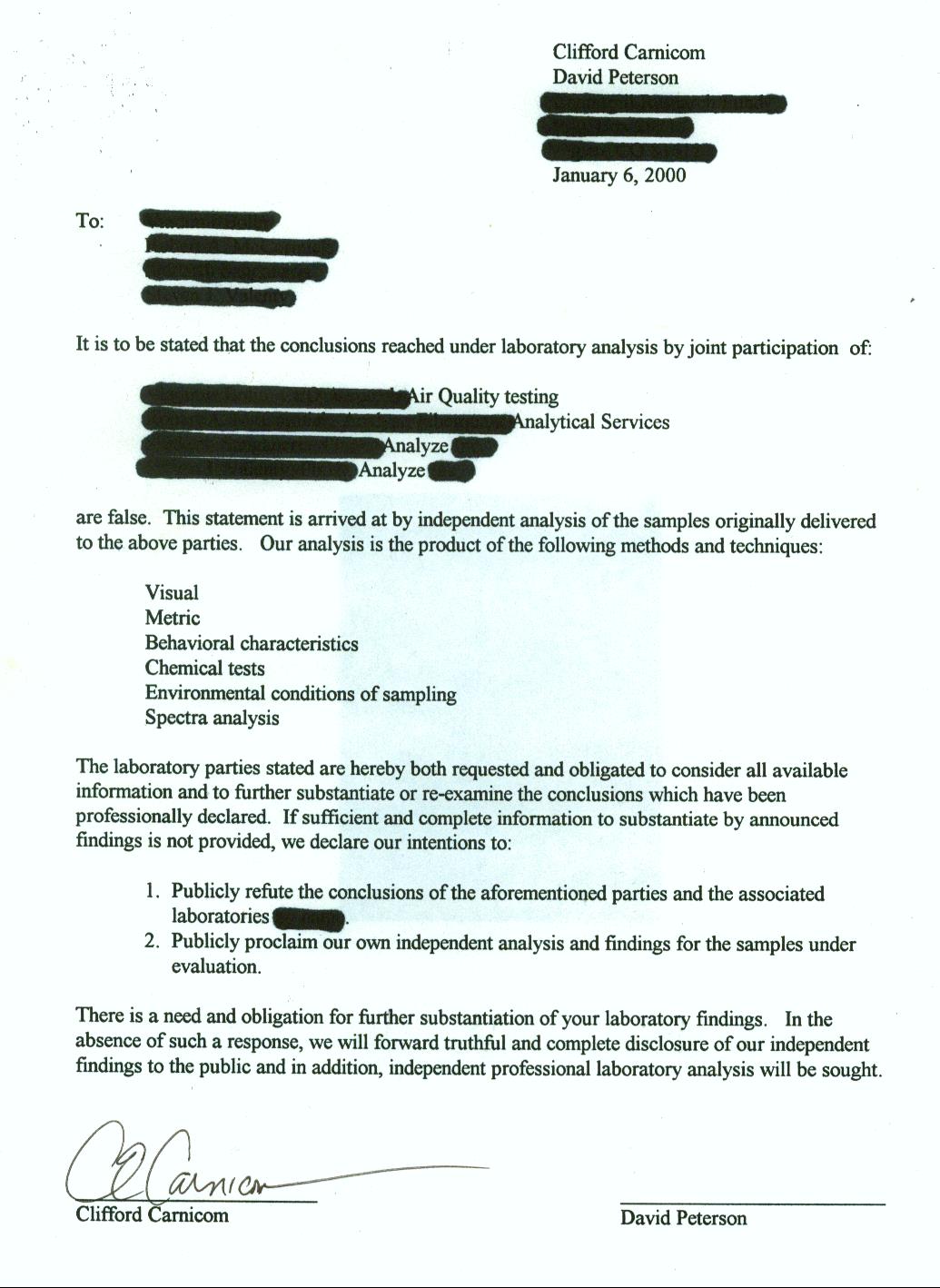 13.  There are additional details that can be discussed.  In the short form, let me assert to you that these airborne environmental filaments, that have been repeatedly observed, reported and collected over the last decade and a half, at a minimum,  are:

a) NOT naturally occurring.

b) NOT a spider’s web or silk.

c) NOT wool (or any other common textile fiber or hair).

14.  They are, however, at least in part, indeed a “proteinacous material”, but that is another story….

The reason my signature does not appear on this statement is that I trusted that we were dealing with a legitimate laboratory at the time this document was presented to them. There were inconsistencies in their findings that were sent to us via USPS prior to this that were the reason the face to face meeting needed to take place. I attended this meeting with Clifford Carnicom to address our concerns with their findings, so I was indeed a witness to how the meeting transpired and in retrospect I would have absolutely signed this document when it was presented to them.