HOW TO PHOTOGRAPH AN AEROSOL PLANE 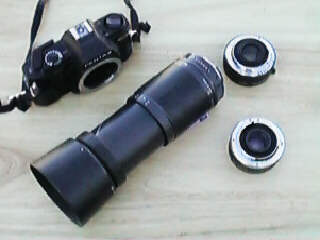 HOW TO PHOTOGRAPH AN AEROSOL PLANE
Readers are encouraged to construct their own telephoto cameras so that close-up photographs of aerosol spraying aircraft can be captured and presented as further evidence to the nation. The configuration shown takes a standard 300mm zoom lens and converts it a powerful telephoto lens (1200mm) at relatively modest cost, and with equipment that is readily available. The first teleconverter transforms the zoom lens into a 600mm lens, and the second teleconverter extends it to 1200mm. This results in an approximate magnification of 24 over a normal lens(50mm). Photographs are taken without a tripod, by simply panning the aircraft at its closest range. The user will have about a 15 to 20 second interval in which to acquire vertical photographs under optimum conditions. It is therefore recommended that the camera be kept accessible at all times. 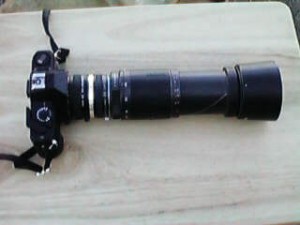 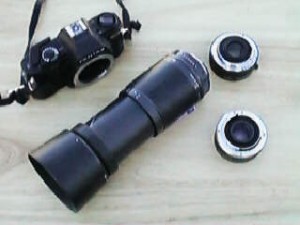 The photographs on this page show the camera equipment which is sufficient to take the telephotos of the aerosol planes which are presented on www.carnicom.com. The technical specifications of this set include:

This equipment is relatively inexpensive. Teleconverters are available for approximately $60 and a zoom lens of this type costs approximately $200. Any standard 35mm body should suffice as long as all the mounts of the lenses are compatible.

The majority of photographs taken are at a full lens extension of 1200mm at 1/500 sec. at f5 (maximum aperture of this zoom lens) with a film speed of 800. This arrangement is at the technical limit
of the camera with respect to light gathering capability balanced with sufficient speed of the shutter to minimize blur.

There are now three categories of apparent spray methods which have been identified through these photographic techniques. The first is a full-length wing spray system as presented on this site through photographs taken on August 14, August 24, and September 9 of 1999. The second method involves what appears to be a delivery system arranged in conjunction with the horizontal stabilizers of the aircraft, as shown on several photographs taken in May of 1999. There is also good reason to believe that a third system involves engine emissions, as numerous variations in method and technique have been observed to occur. The density and size of the aerosols left by the aircraft are in direct correspondence to the methods outlined above.

The ‘Megasprayer’ produces an incredibly dense and thick trail which surpasses all previous experiences of contrail/aerosols formation.

The third method is by nature more ambiguous, as the trails are less dense, have some characteristics of ‘normal’ contrails, and yet they also result in persistent cloud and haze formation.

Your contributions in telephotography can help to resolve remaining uncertainties  in the methods and scope of delivery. Please feel free to forward any disclosing photographs to info@carnicominstitute.org The value of any photograph is enhanced considerably with a discussion of the subsequent behavor of the trail left, e.g., density, duration, continuity, transformation, etc.