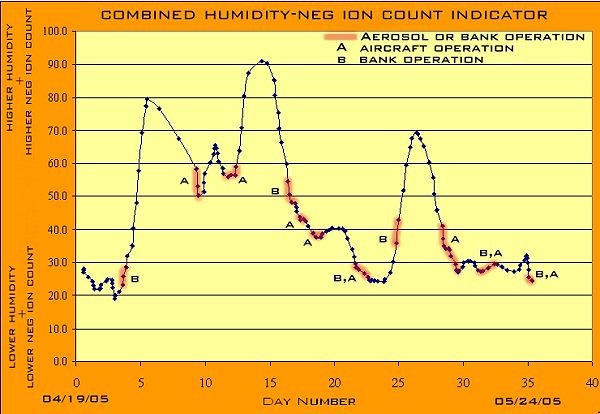 It is thought that the graph shown on this page may well be at the core of the aerosol operations. This graph shows direct ion measurements in combination with historical humidity data during the past month. The graph shows what appear to be highly favored conditions for the conduct of the aerosol operations or the transport of aerosol banks within a region. Aerosol operations are being staged at specific times of low humidity and low negative ion count. These two tenets, that of humidity association and ionic manipulation, have been at the foundation of the aerosol research since the early days of investigation. The current research has refined itself until the specific conditions that are favorable to operation may have been largely identified.

There is information available to indicate that the ionic constitution of the lower atmosphere may be considered as a security issue.No direct legal infringements are known. This researcher makes the claim that environmental monitoring and environmental reporting of all types is a basic right of the citizen; this right is asserted with the presentation of this report to the public.

It is recommended that this page be widely copied, circulated and distributed as rapidly as possible through all means available. It is further advised that the general public openly and overtly participate in this process of disclosure and confrontation of environmental modification. There are significant health aspects, amongst many other profound geophysical considerations, implicit in this data that is presented. Multiple and broader studies of ionic magnitudes and variations in the lower atmosphere are of immediate value. If the current lower atmosphere ionic research is interfered with in any way, it is requested that others dedicate themselves to the task immediately behind.

The interpretation of this data will lead to additional questions.There is also additional data that can and will be presented if circumstances of time permit. This data will portray extreme variations in ionic counts, both positive and negative, as well as extreme variations with positive to negative ion ratios.  As has been suspected, it appears that nature is being tampered with in very serious ways.

Caution is advised in advancing to hasty conclusions or misstatements with regard to ion concentrations, or in changes with respect to ion concentrations. Ion concentration is tied in directly to the electrical nature of the atmosphere and the earth, and this is a complex subject. It is far too simplistic to characterize certain ions as “good” or “bad”; it is the balance of nature that is to be understood. It seems quite fair to state at this stage that the balances of nature are being upset with artificial methods that threaten the viability of life on this planet.

A very general interpretation of the current data can be made as follows: Low humidity is a period of relatively low moisture in the atmosphere. A low negative ion count is also generally indicative of lower moisture levels in the atmosphere. The research indicates that both of these variables, taken together, serve to indicate likely periods of aircraft aerosol or aerosol bank operations. This finding may appear to be in contradiction to the humidity conditions that have been associated with the operations, but in reality they are not contradictory in any fashion. Certainly what is in direct contradiction is the infamous claim by the EPA, FAA, and NASA in the so-called “fact sheet” that purports to explain the “persistence” of trails during periods of “high relative humidity”. It is a point of fact that the exact environmental conditions of the “fact sheet”  are never specified in detail; the wording has always remained ambiguous, albeit intentional or not.

The data is showing exactly the opposite occurrence, and that is that the operations themselves appear to be conducted at strategic and specific environmental conditions of lower humidity and lower negative ion count – at least in this region of the country. It is important to emphasize this statement relates to the actual occurrence of the operations; not the time before the operation, and not the time after the operation. In fact, it is expected that moisture levels in the atmosphere are likely, if not expected, to increase before and after the operations.Previous predictive models by this researcher have borne out this conclusion, and that is that the operations are known to commonly occur IN ADVANCE of approaching moisture. That conclusion also remains valid to this day and is not changed by the presence of the current data. This researcher is aware of potential differences in ground observations and higher altitude observations; both have been investigated, and the use of ground data in this project can not be used to nullify any claims or observations that are being made here.

At this point it appears reasonable to conclude that high moisture content in the atmosphere and a high negative ion count (often associated with increased moisture) are not particularly favorable for the actual conduct of the operations.  Pre and post operative environmental conditions are an entirely different matter that deserve separate and independent study.

Another observation that can be made is that the enterprise appears to be extremely successful in identifying local minimums of lower humidity-negative ion combinations.  This indicates advanced capabilities in differential and predictive meteorological and conductivity modeling techniques.

The value of the current report is that very specific environmental conditions favorable to the actual conduct of an aerosol operation appear to be identified. The two variables of humidity and negative ion count appear to go a long way in assessing the likelihood of such operations taking place. Both variables are given equal weight in their importance at this time, and neither of the two variables can be disregarded or ignored. Considerable pattern analysis and model development has taken place to reach this assessment. It is reasonable to suspect that the agendas of the operations, as they have been and as they continue to be determined, are enhanced if the operations are conducted under the specific environmental conditions that are now under identification. Thoughtful analysis will continue to direct that future research.  Confrontation to the point of initiating a global moratorium on the operations is required in the interim.

There remains much more to be stated on the measurements that have been taken with respect to positive ion counts, total ion counts and positive to negative ion ratios.  The ionic effects of the full moon are also worthy of discussion. This will have to take place at a later time. The mathematical specifics of the model that has been developed to isolate the current pattern can also be discussed at a later time. The current work is offered such that the process of analysis and interpretation can begin without hesitation.