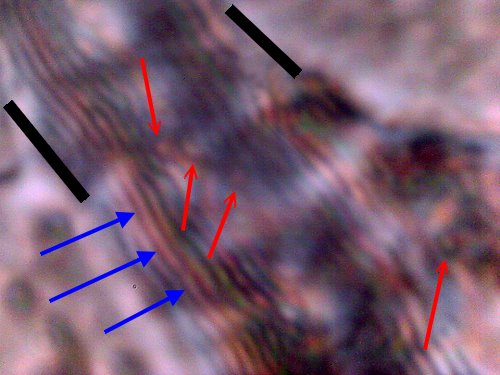 An individual with Morgellons symptoms has recently expelled a massive volume of fibrous material from the gums of the mouth.  This individual is the same as that reported in the paper Morgellons Morphology Confirmed.  The experience up to and including the event was extremely painful to the subject.

The nature of the fibers, upon very high magnification, reveal themselves to be identical in size, structure and form to the skin fibers that are documented in detail on the paper referenced above.

This now brings to four the number of samples from entirely different mediums and environments that are showing similar to identical morphology.  These include the airborne fiber as refused by the U.S. Environmental Protection Agency, the skin fibers as manifest with the Morgellon’s individual, the blood sample of the Morgellon’s individual and the dental sample from this latest event.

The fact that such widespread diversity in environment and conditions is producing these samples of remarkable similarity demonstrates the magnitude of the Morgellons and aerosol issues.  It remains an open question as to what level of reporting is required to motivate the general citizenry to act upon these topics.

A small portion of the original dental material as expelled from the gums of the individual with Morgellons symptoms.
Arrows point to instances of what APPEAR to be individual filaments
(actually composed of innumerable sub-filaments at the micron to sub-micron level).
Sample expelled into kitchen sink; red coloration results from wine
which was found to be useful as an extraction fluid.
Extreme dental pain encountered by the individual prior to the expulsion process.
More moderate, but still severe,  pain continued during the expulsion process which occurred over several days.
Magnification approx.5x.

Another segment of the dental filament sample expelled from the gums of the individual.
Arrows point to additional instances of isolated filaments.
Darker and more extensive masses are comprised of filament masses.
Magnification approx. 10x.

The dental filament sample at extreme magnification.
What is enclosed between the black boundaries is what appears to the eye to be a single filament.
Internal network of micron to sub-micron filaments becomes evident.
Notice that this dental sample is remarkably similar in form, size & shape to airborne, skin & blood samples
previously reported on Morgellons: Airborne, Skin & Blood – A Match
Blue arrows point to individual sub-micron fibers within the enclosing filament.
Black bars point to general exterior boundary of enclosing filament.
Notice interior circular/sphericals structures within (red arrows) as also previously reported on other medium samples.
Magnification approx. 7000x. 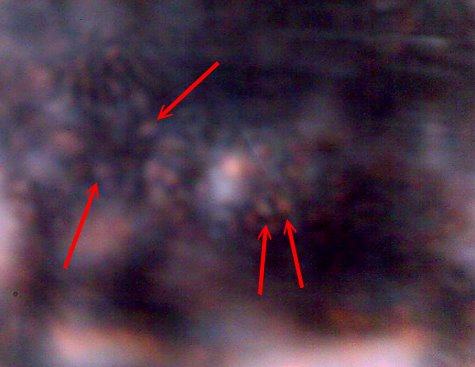 Large internal network of sub-micron structures within dental filament sample that have been
repeatedly observed across a variety of medium samples (airborne, skin, blood and dental).
Please refer to additional reports that have recently been published.
Red arrows point to individual instances.
One of the two basic forms (sub-micron filament & sub-micron circular/spherical entity)
that requires identification.  Magnification approx. 7000x.

Readers may also wish to familiarize themselves with the report entitled, Morgellons: Airborne, Skin & Blood – A Match on this site.  It may be beneficial to be aware of the additional reports : Morgellons : First Observations, Morgellons Morphology Confirmed and Blood Testing.  It may also be of interest to recall an earlier report filed in December of 2003 entitled, Unusual Medical Finding.  There may or may not be a relationship between the December 2003 event and the current affliction of this report.  The latter report has historically received some attention from those that chose to attempt to discredit the aerosol and Morgellons issues.  It was often stated that the subject(i.e., this researcher) self-inflicted unnecessary pain during that fiber removal process.  It is fair to say that that the amount of pain incurred in the pre-emptive 2003 event was quite minor relative to what the subject of this current report endured.  People may wish to keep that fact in mind as the magnitude of the Morgellon’s issue is more fully understood.

There are some additional aspects to the December 2003 event involving laser phototropic response and persistence of condition that may eventually become relevant and require further elaboration.