The presence of the gas during growth was first established and identified with the methods of gas chromatography.  Carbon dioxide production is in the majority proportion and carbon monoxide accompanies this in a lower proportion, as is shown below.

As described in previous papers, the tentative nomenclature for the microorganism has been designated as a “cross-domain bacteria“, or CDB.  This terminology remains in place by this researcher as study continues; all evidence does continue to support the hypothesis of a predominant bacterial origin and nature.

The conclusions regarding the gas as a product of metabolism have been further confirmed with the use of infrared spectrometry.  The carbon dioxide spectrum (gas) presents strong absorbance peaks in the 2100 – 2200 cm-1 wavenumber range.  These peaks have been repeatedly identified within the gaseous samples from the CDB microorganism. 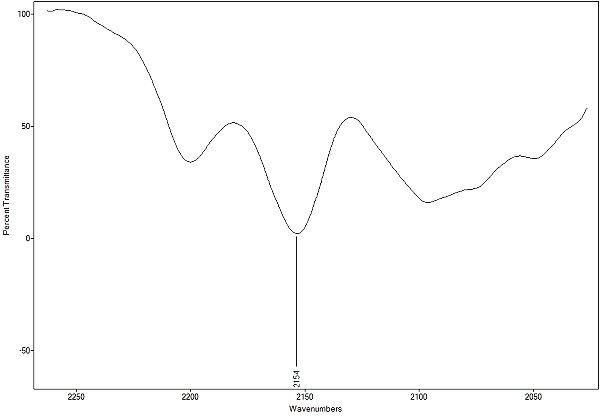 Infrared spectrum of the gaseous metabolic product from the CDB.  Absorbance in the 2100 – 2200 cm-1 wavenumber range has been repeatedly identified, and is shown above.  This absorbance in this specific infrared range further supports the conclusion of carbon monoxide production by the microorganism.

Reference spectrum of gaseous carbon monoxide.  Absorbance in the 2100-2200 cm-1 wavenumber range exists as a unique identifying characteristic of the gas.  Source of image : NIST

Gas chromatography and infrared spectrometry methods, applied repeatedly to multiple samples of CDB growth, both support the conclusions of carbon dioxide and carbon monoxide production reached in this report.

Additional gaseous production, such as that from hydrocarbons, remains an additional topic of investigation and remains for future discussions.

The primary purpose of this paper is to disclose the result in preparation for future examinations.  A few historical and leading comments will be made with respect to the health issues that warrant mention, but this topic is obviously deserving of its own discussion in future days.

The finding is, of course, of significance.  However, for those familiar with the history of research on this site, the disclosure should not be one of total surprise.  There is now a record over several years of an ongoing chronicle of reported and expected interference with major systems of the body from the Morgellons condition.  This interference and damage to human health most emphatically concerns all aspects of energy production, oxygen transport, iron utilization and respiration.  It has been reported on continuously for a period of many years now.  What differs in the the current situation is that a primary mechanism for a portion of that harm may be under definition.

I will spare the reader of citing the legacy of work on this site that is completely and totally consistent with a finding of carbon monoxide within the metabolism of the organism; I do, however, encourage that investigation to understand the depth of work that leads us to this occasion.

The most immediate need will be a preview to some of the potential health risks from carbon monoxide in the body.  I would suggest that a focal point of investigation be that of chronic low level exposure and the associated symptoms and conditions that might result. Higher concentration impacts, for a myriad of practical reasons, would not seem to be relevant at this time. Carbon monoxide and human health is serious business no matter how you choose to look at it.   It will also be of interest in our future to compare the low level exposure symptoms with those that will, in due time, become known from the investigative survey (MRP) conducted by this Institute.  The investigations will be complicated further by the broad array of disruptors that been brought forth in the course of the research over many years.

Let us look at the latter question first.