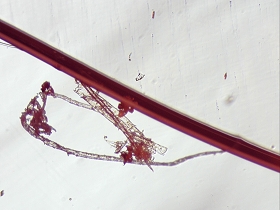 A second rainwater sample has been evaluated. On this occasion, both organic and inorganic attributes of the sample have been examined.  Although the sample investigated is of much larger volume, the results demonstrate an essentially equivalent level of aluminum present to that defined within the earlier report, i.e., approximately 2 PPM.  This magnitude exceeds the US Environmental Protection Agency recommended standards for aluminum in drinking factor by roughly a factor of 10.

In addition, various organic attributes of the sample are introduced within this report. 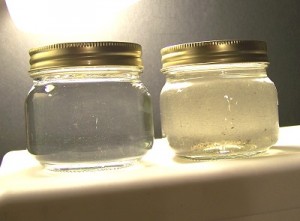 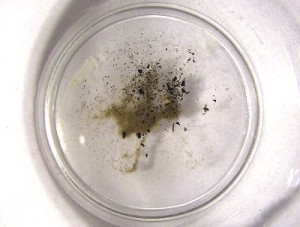 Residual Solid Materials from the Rainwater Sample of this Study

The volume of the sample collected is approximately 6.5 liters over a three day heavy storm period, collected in clean containers that are were exposed to open sky.  The sample was concentrated by evaporation under modest heat to approximately 6% of the original volume.  It is apparent from visual inspection and by visible light spectrometry that the concentrated rainfall sample is not transparent and that it does contain materials to some degree.

Visible light spectrum of the concentrated rainfall sample.  The increase in absorption in the lower ranges of visible light correspond to the yellow and yellow-green colors that are observed with the sample.
The pH of the concentrated sample is recorded at 8.5; this value is surprisingly alkaline and indicates the presence of substantial hydroxide ions in solution.  The pH of the solution prior to concentration measures at 7.5; this also must be registered as highly alkaline under the circumstances.

The pH of  ‘natural’ rain water has been discussed in earlier papers and its relationship to the expected value of 5.7 due to the presence of carbonic acid in the atmosphere (carbon dioxide and water).  The departure of natural rainwater from the theoretical neutrality of 7.0 is one aspect of the pH studies that I conducted in conjunction with numerous citizens across the nation some years ago, and these reports remain available.  The current finding is remarkably alkaline and, by itself, is indicative of fundamental acid-base change in the chemistry of the atmosphere.

From those early reports, it may be wise to recall the words of Paul Crutzen, Nobel Prize winner for Chemistry (Atmosphere, Climate and Change, 1995), who stated that the most important chemical attribute of precipitation is indeed the pH value.  It behooves us, as a species, to act rather quickly on any reasonable claim to a significant change in fundamental atmospheric chemistry that may exist.  It must be acknowledged that these same claims now prevail over decades of time, and that any dismissal as an aberration of no consequence is unjustifiably diminutive.

The sample has been examined again for the existence of trace metals using the method of differential cyclic chronopotentiometry, as described in the earlier report. The results are essentially identical to that of the earlier report, and once again the signature of a soluble form of aluminum is detected . The sample in this case, however, is of much larger volume, was collected over a longer duration, and was more highly concentrated that that in the preliminary report.

The concentration level was again determined, and the analysis indicates a level of soluble aluminum within the rainwater sample at 2.0 PPM.  This compares quite closely with the earlier sample result of approximately 2.4 PPM . This determination once again takes into account the concentration process that has been applied to the sample for testing sensitivity purposes.

First, this value exceeds the US Environmental Protection Agency (EPA) standards for drinking water by roughly a factor of 10, again using the most conservative approach possible that can be taken.

Second, the previously referenced U.S. Geological Survey statement from the year of 1967 is valuable both in relation to evaluating the EPA standards as well as assessing the expectations of aluminum concentrations in natural waters:

There is now a necessity to include an additional aspect of the rainfall analysis that has made its presence known more clearly.  This is the case of biologicals.  It is a fact, that in addition to the repeated detection of a trace metal at questionable levels, certain organic constituents are coming to the fore.   The test results are repeatable at this point and these organics will eventually require an equal accounting for their existence.  I will not enter into an extended discussion of their potential significance at this time, as the first and necessary step is to place on the table that which must be confronted.  My introductory suggestion at this point is to become aware of a previous paper on this site, entitled “A New Biology” to gain some familiarity with the scope of the issue . It is fair to say that along with changes of chemistry in this planet, we must also confront certain changes in biology that are in place.  The history of this planet, the cosmos, life and our own species is dynamic, and intelligence itself is partially expressed in the ability to adapt to changing circumstances.  We are in the process, whether we like it or not, of learning if and how quickly we can adapt to changes that have and are taking place, induced or otherwise.  We may also choose whether to participate in the process (hopefully for the betterment of the world, as opposed to its detriment), or if we shall remain ignorant in an effort to ensconce ourselves in a purported comfort zone.

The methods of examination to be presented here are twofold: that of microscopy and that of infrared spectroscopy.  Here are some some images that relate to the fact of the matter; they are repeated in both samples that have been examined: 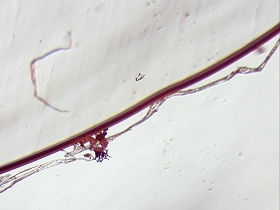 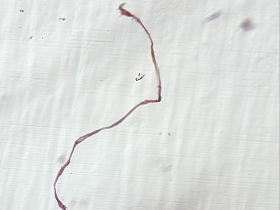 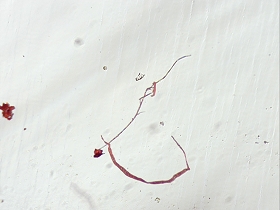 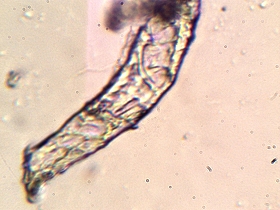 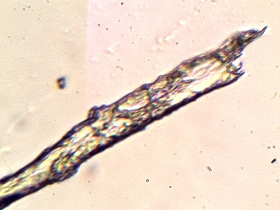 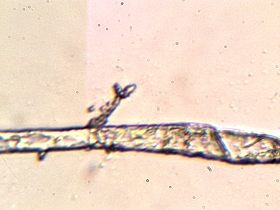 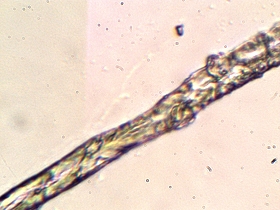 These images will not be elaborated on in detail at this time, as it may require a period of time to examine the information that has come forth here.  They most certainly indicate a biological nature that shares a common origin with many of the research topics that have evolved on this site over the years.  It may be worthwhile to begin by becoming familiar with the ‘environmental filament’ issue that is so thoroughly examined on this site.  Since it seems clear that we are indeed dealing with an ‘environmental contaminant’ of sorts, the history of communication with the U.S. Environmental Protection Agency may also be worthy of review.

It would also seem to be the case that a significant portion of the residual material is inorganic as well, as in an insoluble metallic form.  It may be that the insoluble residual material may be composed in part as an organometallic complex, based upon historical findings.

Regardless of the source or impact of these materials, it does seem to fair to state that an accounting for their existence in the atmosphere and rainfall is deserved.  Each of us may wish to play a part in seeking the answers to such issues and questions before us all.  I wish for this to happen, as I suspect many of us know that it is the right thing to do.