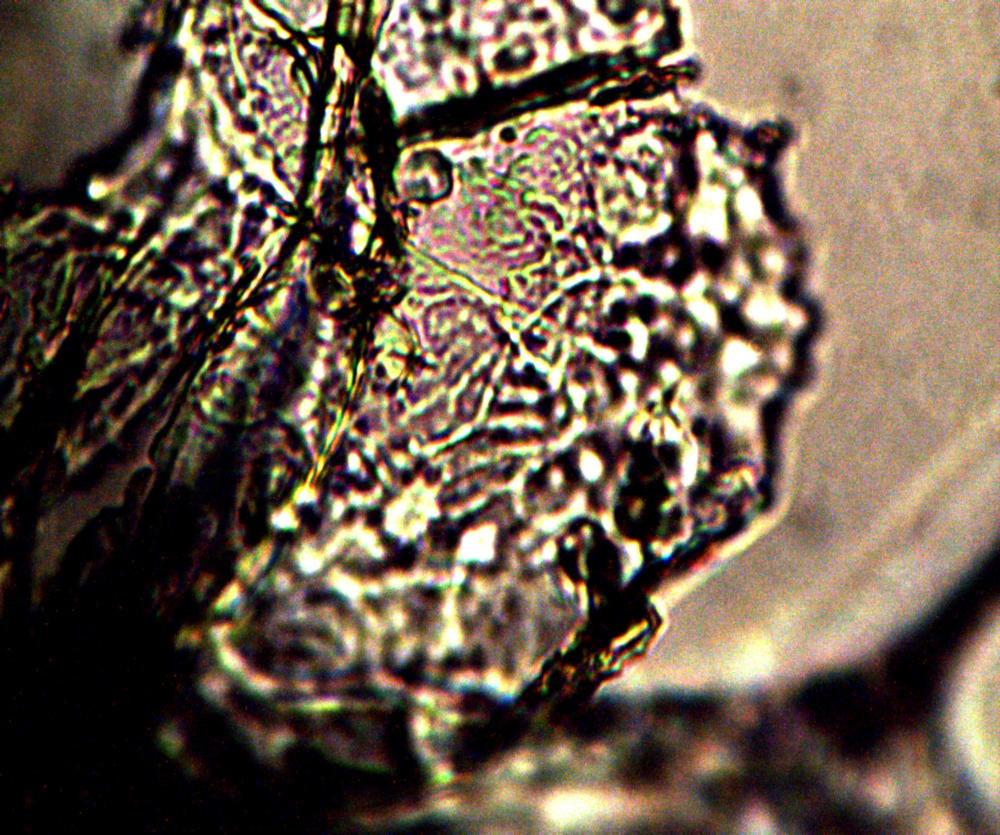 It is generally perceived that the so-called “Morgellons” issue is primarily, if not exclusively, a human condition. It is not. It will be found that this condition actually represents a fundamental change in the state and nature of biology as it is known on this earth. The evidence now indicates and demonstrates that there is, at the heart of the “condition”, a new growth form that transcends, as a minimum, the plant and animal boundaries.

The precedent for this argument was made some time past in the paper entitled “Morgellons: A New Classification” (Feb 2010); the central theme of that paper remains valid at this time. The very classification of the domains of life is central to that paper. Readers may also wish to refer to the papers entitled, “Animal Blood” (Jan 2010) and “And Now Our Children” (Jan 2008), where additional precedents were established. The August 2011 video presentation, “Geo-Engineering & Bio-Engineering: The Unmistakable Link” is also relevant here.

It is to be accepted that this growth form appears to be ubiquitous in the environment, food supply, plants, and animals and that the reference frame for its existence must be fundamentally changed to be in accord with this reality. 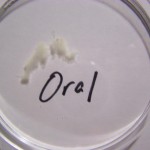 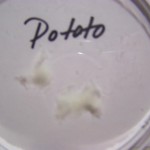 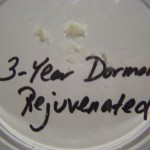 Macro view of variable source culture growths. Human oral filament culture to left, potato filament culture in middle and to the right, the rejuvenation of a dormant culture from a three year old lye extract solution.  Dormancy is established with extremes in temperature, lack of moisture, or caustic chemical environments, as reported earlier.  Growth medium in all cases is a fructose and iron sulfate solution under incubation.  The cultures are identical in view, structure and growth characteristics.  Period of development and growth is approximately 2 weeks.   Click on photos to enlarge. 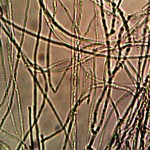 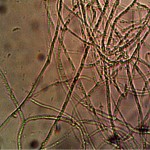 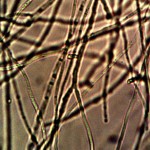 Microscopic views of the three variable culture types from above (left-oral sample culture, center- potato culture and right-rejujvenated dormant culture) under high magnification.  All cultures are identical to the sub-micron level including external sheath and internal bacterial-type form.  Click on photos to enlarge.  Magnification : approx. 5000x. 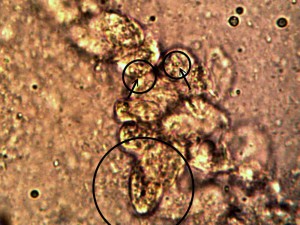 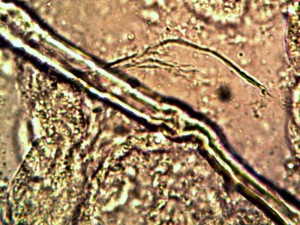 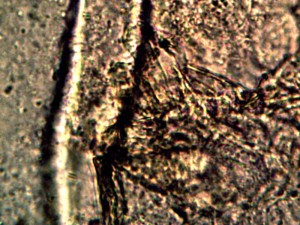 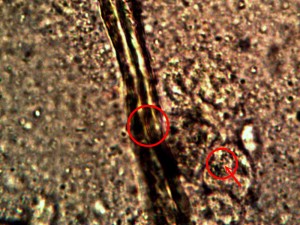 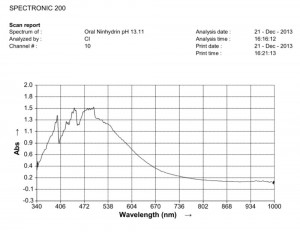 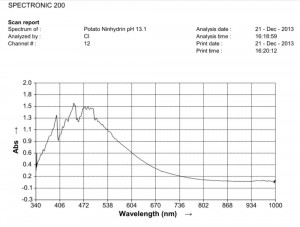 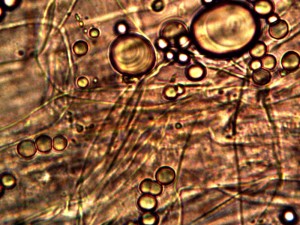 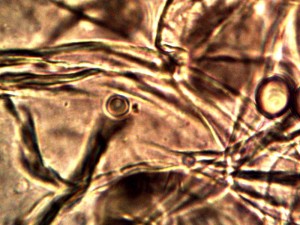 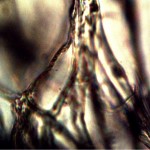 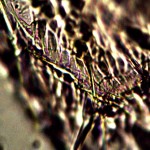 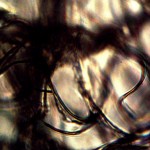 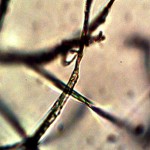 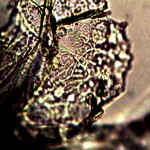 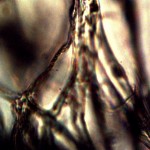 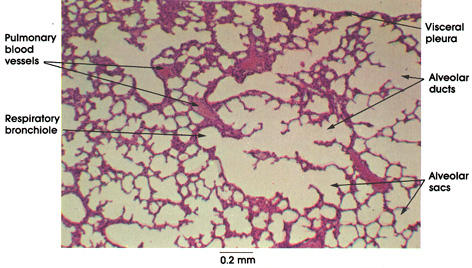 Reference prepared slide of lung tissue from www.anatomyatlases.org.  No extensive filament network visible at this level of magnification or known source for its existence in a control photograph. 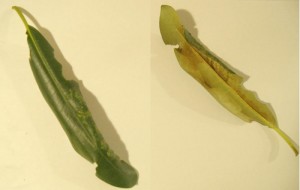 Diseased rhododendron leaf received for observation and study with respect to the bacterial-like forms.  This sample is to be examined under the microscope to further assess the extent of distribution on the conditions reported above. 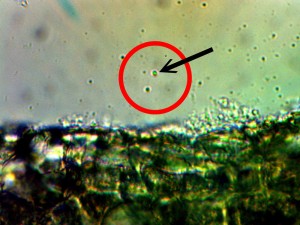 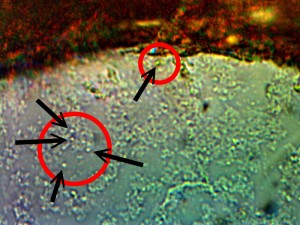 Identical bacterial-like forms located within the rhododendron sample.  The rhododendron leaf is a more difficult sample to prepare due to the thickness and density of the leaf; sufficient visiblity was acquired, nevertheless, with the use of the microtome.  Ease of observation and examination occurs primarily at the leaf edge, and numerous regions of the bacterial-like forms were identified.  Isolated examples are shown above as outlined.  Magnification approx. 5000x.

Perpetuation and confirmation of the original growth form within the rhododendron leaf through the culturing process.  The existence of bacterial-like forms within an additional plant form, i.e., ornamental, is confirmed.  The age of the culture is one day. The rhododendron culture has also produced the filamentous form within approximately one week of time; it is therefore in keeping with all observations and conclusions stated on this paper.  Original magnification approx. 5000x. 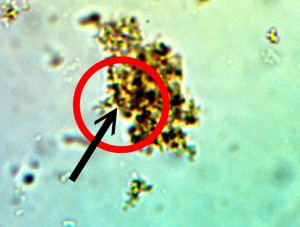 This work demonstrates that the “Morgellons” situation has been completely understated and underestimated in its significance and distribution.  It is no longer to be considered as unique to any life form or species.  The term itself, as commonly interpreted to represent a condition or disease,  is inadequate to encompass the scope of impact to the biology of the planet.  The nominal attention to classification and nomenclature of the life form by the scientific community is also long overdue, and this community will soon be forced to enter into that review process.  It is recommended that such nomenclature capture the true nature of this life form, as it is now known to cross the domains of biological existence on this planet.

Note: Appreciation is extended to Ryan Hannigan for his provision of the rhododendron sample for comparative analysis.  Readers may wish to stay attuned to any further developments from Ryan’s research that is under development, including that of botanical study.  CEC