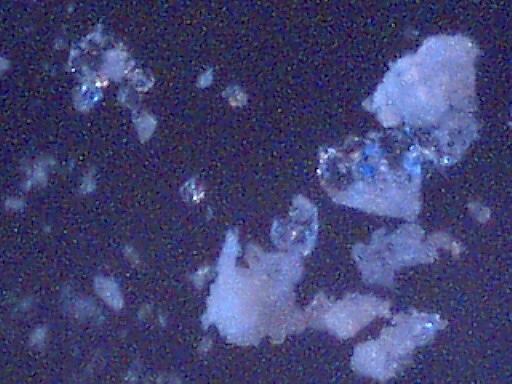 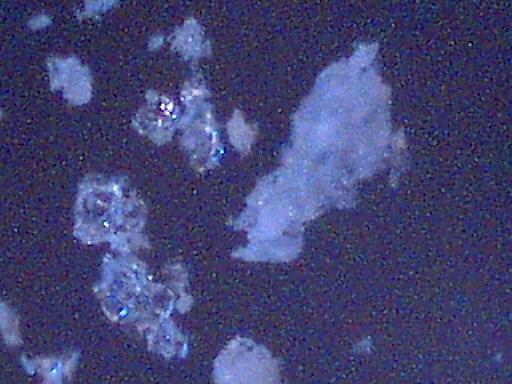 An additional crystal form is under examination. This solid form appeared as a salt-like form on an outdoor driveway on June 17 2003 in Carptenteria, CA. No adequate accounting for the source of the material or its presence outdoors exists. The distinguishing characteristic of the material under the microscope is a crystalline structure that is both opaque and translucent; this quality can be seen in the microphotographs that have been made available. The material is solid and white in color. A second distinction is the lack of solubility; the crystal form is insoluble in water, hydrochloric acid, sulfuric acid, sodium hydroxide and acetone.

The material, when placed into distilled water, breaks into small particles on the order of a micron in size which exhibit brownian motion. The particles at all times remain insoluble. 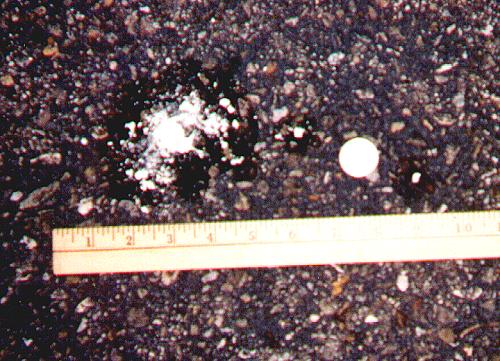 The description of the sample and conditions from the sender is as follows:

“Sample Taken on Tuesday June 17, 2003
In the black asphalt driveway;
At: Carpinteria, CA

8:30 a.m. : I first noticed the slightly darkened spot (looked like it had been wet) with the two balls of white powdery material, looking like salt. I collected the balls into a used “chromium supplement” brown glass jar. At this time I also noticed another smaller, slightly darkened spot about ten feet away that had a near flat white mark that looked like white chalk.

1:00 p.m. After speaking with Clifford Carnicom I went to the driveway to photograph the samples. So, I placed the two white balls back into the spot 1t came from. Then, I noticed two other slightly darkened spots and white powdery samples, lying just inches away from the original spot site. These two spots were similar in size, both being much smaller than the original spot. The white powdery samples in these two spots were rectangular, not round; in other words, they were cubed, not spherical. I noticed that all three spots lined up, like something splattered in succession. . .literally, one, two three.”

[Additional Note: There are three deposits of material within a 12 inch region; these deposits are located primarily E-W in orientation and measure 5″, 1″ and 1″ in diameter respectively.. An additional isolated deposit exists approximately 10 feet further to the east, approximately 3″ in diameter.}. 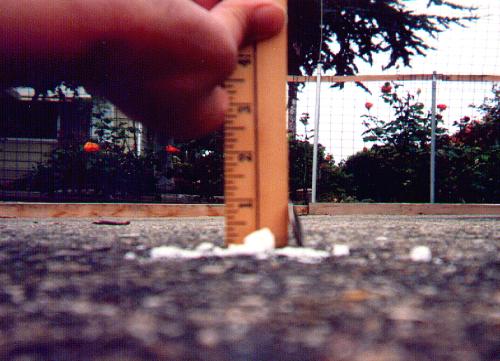