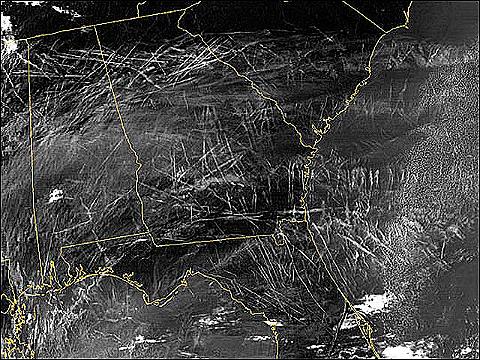 The highest levels of the United States government have been used to lie to the American public and the world. These lies have culminated in the conduct of a criminal war, and the harm to civilized society from these actions continues to this day.

History will eventually reveal, if it is truthfully written, that the United States Air Force is party to another set of falsehoods that attempt to conceal the nature of the aerosol operations that are being conducted upon the public without their informed consent. These aerosols have now dramatically altered the very nature of the atmosphere in ways that threaten our existence upon this planet. Examination of the issue strongly indicates a dominating military objective as only one of many aspects of the aerosol campaign. The first tactic of choice by the United States Air Force was an attempt to ridicule the issue by authoritatively declaring it as a “hoax.”

This complicity has forayed into the arena of brazen propaganda, and is being conducted by another arm of United States “authority“, the National Atmospheric and Space Administration (NASA). NASA has recently adopted a public strategy of abusing its position of national and public service by attempting to indoctrinate the citizens, including children, that the aerosol operations are a “normal” and expected consequence of daily life and aircraft. Nothing can be further from the truth, as is also apparent from an honest and thorough examination of the issue.

The latest strategy, apparently in partial reaction to the failures of the “hoax” declaration, would earn a rank of commendation from George Orwell himself. The doublespeak from NASA now characterizes the onslaught of aerosol operations, i.e., the deliberate and systematic injection of massive amounts of particulates into our atmosphere by aircraft, as “CONTRAIL CLUTTER” and as “SPECIAL CLOUDS”.

The “clutter” and “special clouds” are now to be counted by our children in staged “educational” events. These events serve the purpose of indoctrination for an Orwellian world that declares the operations to be “normal”. It is a world in which there is no need to question this authority.

The following excerpts exist from recent public web sites that are administered by NASA:

From the NASA Student Features Program:
“We’re looking for special clouds called contrails.
We want students, teachers and parents all over the world to report the number of contrails in the sky….
Contrails look like white lines in the sky”
http://www.nasa.gov/audience/forstudents/5-8/features/F_Contrails_5-8.html

For those that wish to examine the question of “normalcy”, I encourage them to view a documentary that is available through the public domain on this site. Images from a documentary are sometimes helpful to clarify an issue. The recent presentations by NASA, coupled with the historical stance of the US Air Force, and the actions of the United States government are at the very core of propaganda. The effects of this deceit are now apparent in the world situation.

The citizens and nations of the world have not yet confronted the aerosol issue in an organized and public fashion. There is no guarantee or assurance that they will ever do so. The methods of deception are now being extended to the minds of youth with a longer term goal of indoctrination. These methods purposefully separate us from truth with an agenda of manipulation and control.

If the children are not given the opportunity to seek out the truth, you have lost your cause.

Note: My thanks to the citizen that has brought this “public information” to my attention.