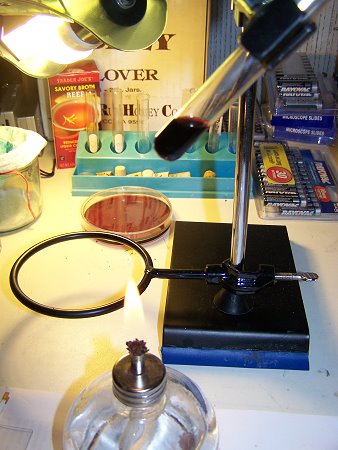 I am not offering any medical advice or diagnosis with the presentation of this information. I am acting solely as an independent researcher providing the results of extended observation and analysis of unusual biological conditions that are evident.

A partial summary of the research accumulated through this site on the so-called “Morgellons” issue is as follows:

1. The internal filament repeatedly described, as in the dental extraction samples, appears to be a primary pathogenic form. These internal biological filaments have been identified, to a varying degree, in essentially all individuals that have participated in the testing process thus far. The blood of participating individuals also displays, to a high correspondence, anomalies in structural integrity. A sub-micron spherical structure, to be assessed in further detail at a later point, also commonly occurs within the erythrocytes.

2. The morphology, size, structure and chemistry of these internal filaments appears to be highly similar to that of certain environmental filament samples, notably that which has been refused by the Environmental Protection Agency (EPA) for identification. In addition, numerous research papers over the last ten years document the repeated detection of unusual biological components within a series of environmental samples, including that of erythrocytic (red blood cell) forms.

3. Numerous cultures have been developed from the internal filaments on agar and in wine based mediums. These cultures are essentially identical in form and chemistry with that of the original internal biological filament samples.

4. The cultures produced from the internal biological filaments (dental samples) have been shown to produce an erythocytic form. These cultures have produced a positive result for the existence of hemoglobin by two separate forensic level tests. The determination of the erythrocytic form is also repeatedly evidenced by direct observation, measurement and biconcave morphology.

5. The production of erythrocytic forms within direct biological filament samples and by culture is completely outside the known boundaries of conventional science and biology. It is repeatedly evident that these same erythrocytic forms can withstand (and even flourish in) extremely adverse environmental, chemical and thermal conditions. The evidence thus far indicates the original erythrocytic form is dessicated or spore-like and a reconstitution process is required to bring the cellular structures to full form and activity.

6. A method has been developed to break down the outer casing of the internal biological dental filaments. The internal components of these filaments have been examined in detail upon repeated occasions. Two main structures emerge: an erythrocytic form and a sub-micron spherical form. The best current assessment of the sub-micron spherical form is that of being Chlamydia-like, with a special interest in Chlamydia Pneuomonia. Mycoplasma forms are also strong candidates of consideration as a “tertiary form” that is also frequently observed. Please also refer to the the paper entitled Pathogens and the General Population, April 2008, for the introduction of the Chlamydia-like structure as a primary topic of interest; the rationale of identification for this candidate remains. In addition, recent size measurements and the response of the Chlamydia-like structure to Giemsa stain further solidifies that rationale.

7. There is a strong consideration that the internal structures from the internal biological filaments are of a synthetic or artificial nature. This assessment is based upon an observed uniformity in geometry as well as the hostile chemical environment under which reconstitution takes place.

8. The internal biological filaments and the cultured form of the filaments have been subjected to the same chemical and thermal breakdown process. The same two internal structures are evident and observed in each case, that of an erthyocytic form and a Chlamydia-like form.

9. The existence of the internal biological filaments, the existence of introduced or modified erthrocytic forms, the Chlamydia-like structure and the tertiary form are interpreted by this researcher to be critical and central aspects of the ” Morgellons” condition. It is accepted that numerous symptom manifestations are reported in association with the condition; this report simply enumerates that which exists as a common denominator within all studies conducted thus far.

10. The source of the erythrocytic form and the Chlamydia-like organism is the filament under study, either in the direct biological internal form or identically from the cultured source. This assessment is reached through direct observation.

11. Success has been achieved in developing a solution based culture that originates from the decomposition (chemical and thermal) of the cultured filaments. A complete cycle of growth has been obtained. An aqueous or solution based culture development has numerous advantages in the development and application of experimental procedures. This culture work is based upon the following sequence:

13. It can be shown by direct observation that the cultured filaments, after decomposition through chemical and thermal processes, appear to be the source of the blood anomalies first reported on by this researcher in November and December 2007. It is anticipated that the direct biological form of the filaments is likely to produce an identical result, as the cultured forms derive from the direct biological forms. Please also refer to the papers entitled Blood Testing and Morgellons : Airborne, Skin and Blood – A Match for a partial background preparation on this subject. Three structures are observed in the process : erythrocytic, Chamydia-like, and a “pleomorphic” (many form) ribbon or sausage-like form as shown in these original papers. A mycoplasma form is a viable candidate for the “pleomorphic” (tertiary) form.

14. Some of the primary functions of the blood include:

15. There are now strong parallels of interest (specifically Chlamyida Pneumonia and Mycoplasma) that have emerged between the current work and that of prominent research on the so-called “Gulf War Syndrome”.  Additional parallels of interest occur with such conditions as Lyme Disease, fibromyalgia and Chronic Fatigue Syndrome.

16. The structure, chemistry and internal composition of the biological based filaments appears at this stage to be essentially identical to that of the cultured filaments. This offers the distinct advantage that numerous research projects can now be pursued within a controlled laboratory environment, including that of growth inhibition.

17. It is understood that there are likely many numerous variations of development, form and manifestation with respect to the ” Morgellons” condition. This researcher has focused on, and continues to focus on, those elements that appear to exist as a common denominator in most (or all) subjects, regardless of any external symptoms that may or may not be present. It remains the assessment of this researcher that the blood (and the alteration of it) and the existence of certain filament forms (INTERNAL to the body) are central to the condition. The existence of skin anomalies does not appear to be, in any way, a suitable criteria for establishing or denying the existence of the condition. Thus far, essentially any individual that has been studied displays, to a varying degree, the common denominators of blood anomalies and filament existence that are a basis of this report. Exceptions to this last statement in some fashion are presumed to exist (although not identified thus far) and they are an obvious desirable pursuit in the research.

18. Future immediate needs include a full protein and genetic analysis of the filament forms, cultures and components that have been repeatedly identified. Additional resources will be required to accomplish this.

19. Growth inhibition studies, especially upon the culture forms that have been developed, also exist as an immediate requirement. Preliminary studies with prospect are in progress. Additional resources can accelerate this process.

20. The available information indicates that the human condition is likely to have been affected en masse. 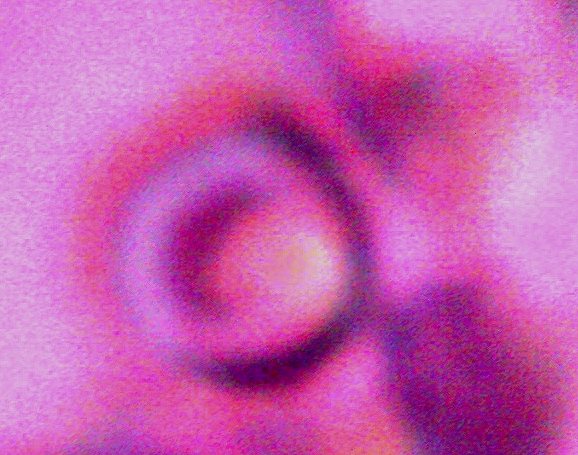 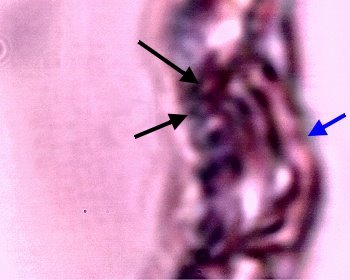 An example of what appears to be a developing filament form within the latter stage of the culture sequence described immediately above. Examples of the Chlamydia-like structures  are visible to the left (black arrows) and the pleomorphic, tertiary (ribbon-like) form (black arrow) is visible on the right.  In addition, a coalescing and enveloping structure is visible that contains  the identified components ; it possesses full similarity to the filament forms  studied extensively.
Magnification approx. 8000x.