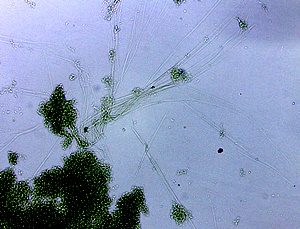 This paper is Part Three of a Six Part series.

There is no possibility of avoiding the following statement, and it is declared at the onset.

Direct evidence indicates that the application of a low magnitude electrical current can or will transform a blood sample to the point that it is no longer recognizable as blood in any conventional sense, and the nature of the blood is then dominated by the presence of the cross-domain bacteria (CDB) (CI nomenclature) microbial life form and its manifestations.  The blood sample examined in great depth is one of those discussed previously within this specific six part report series.

This work took place between February and May of 2022 in a field setting with portable instrumentation.  The work is motivated by the rather profound blood coagulation activity recorded in a previous paper, Blood Alterations I : Coagulation (Jul 2022).  The record of observations for this work is in the Carnicom Institute Laboratory Notebooks, Vol 26 and 27; these volumes are available to the public through this site. The work is extensive and detailed in nature and the laboratory notes will serve as the most accurate record of what transpired.  This paper will be a summary of the processes and results that have unfolded in the course of this recent work; the previous paper entitled, Blood Alterations II : Means & Methods is a helpful adjunct to this purpose.

An explanation is now required to justify the opening statement of this paper.  Please be forewarned that a series of complex steps is involved in making this conclusion.

The first stage of examination suggested that AC voltammetry would be a suitable method to explore some of the chemical changes that might be occurring within the blood samples to cause the profound coagulation that appears.  The general benefits and application of AC Voltammetry is described in the previous paper of the series and is not repeated here.  The use of this method was entirely exploratory at this point, and there was no expectation whatsoever of what was eventually to occur.

The sample under examination here is the introduction of a couple of drops of fresh blood into a vial of 3-4 ml. of distilled water.  The author is aware of the osmotic influence of distilled water upon erythroctyes (red blood cells) and this poses no limitation to the problem of blood composition at this point.  The specific conditions of the AC voltammetry technique employed are described in detail within the laboratory notebooks.

One of the first observations is that the application of current in this mode to the blood sample produced a “frothy”, or foam-like material that would rise to the top of the solution. This investigation has never been done before and there are no presumptions in place as to what will occur or what is to be found.  This mode of electrochemistry was repeated upon the blood sample on numerous occasions, and the frothy material (foam, or “suds” like) developed again each time.

Other observations were recorded in the process.  An additional observation is that over time the vial blood solution underwent a series of active electrochemical reactions and then eventually clarified itself with a settling of bright red material on the bottom of the tube, presumably erythrocytes subjected to osmotic disruption.  Additionally, the activity level of the various electrodes involved was recorded within the notes.

The process was repeated and the frothy material at the top of the tube garnered increased interest.  The obvious and foremost action is to examine the frothy material under the microscope.  This presents the first phenomenal observation within the electrochemical process; this result still is completely unexpected and for that matter, it remains completely unexplained.  One example of the result is below: 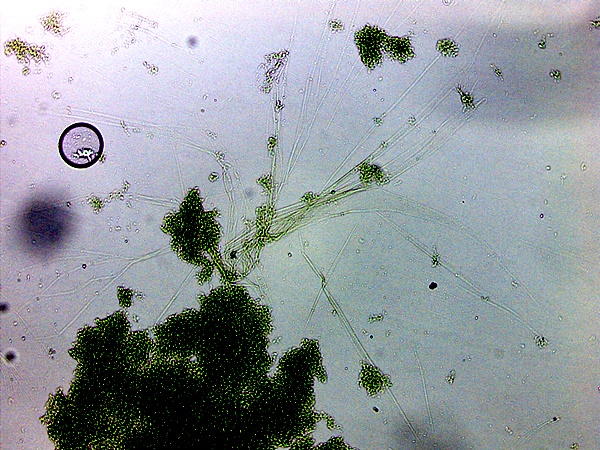 What we see here is not blood in any conventional or conceivable sense.  This author has an extensive history of study of the cross-domain bacteria (CDB) (CI nomenclature) microbe  that is deeply embedded within human( and animal) blood samples.  The growth event that has taken place from applied electrochemical energy is a complete and total match with the CDB microbe.  It is also important to note that no significant filament growth (characteristic of the CDB) was visible in earlier observations of this same blood sample. See Altered Blood I : Coagulation.

An earlier paper that provides a great deal of information on the growth variations in the CDB and associated filament growth structure is titled CDB : Growth Progressions (Jun 2014).  A couple of images from that paper follow and show the coincidence and relations between the the CDB and filament formation: 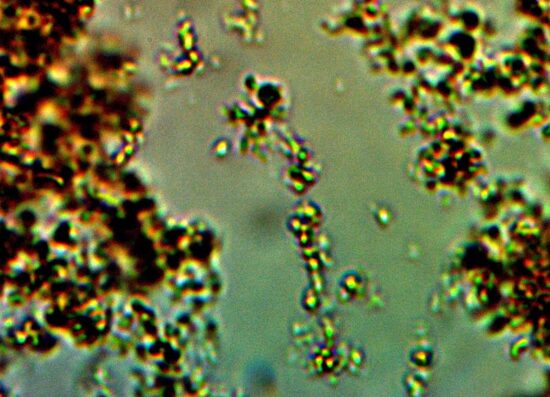 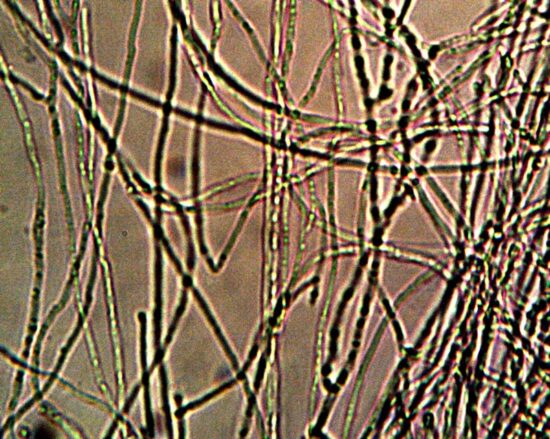 Besides the obvious filament structure formation in the blood sample that results from applied current, we can further open discussion on the “foamy”, or frothy material that is present.  We can ask what is the general occurrence of foam or suds like materials in nature, and what is its expected chemical nature?

There are two frequent sources of foam materials that appear in the natural world, one is the result of pollution and the other is the result of denatured proteins.  Proteins now emerge as a primary target of interest as well as the presence of the sub-micron CDB and the filament structures.  Indeed, we do observe a granular type formation visible in the slides below: 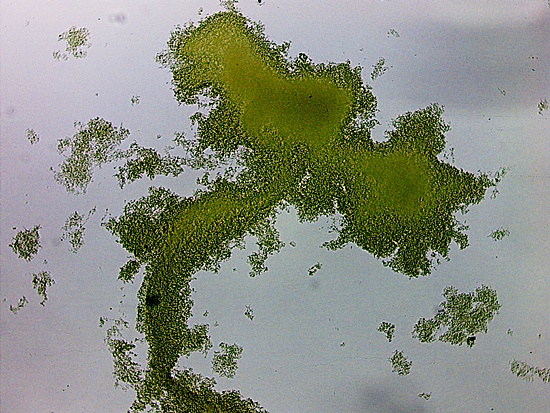 Granular structur within blood sample, ~1500 x.
Electrical current has been applied to the sample.
Primary candidate determination is that of a generated and foreign denatured protein.

The result above is one of our early clues that our foam production in the blood via AC voltammetry consists of three major components: the CDB, the filaments, and a suspected foreign CDB generated protein.  The foam material is a distinct chemical separation from the remaining settled red contents in the vial, and these will be evaluated later in the process.

The question of whether a protein exists is answered with the use of a suitable protein detection reagent test. This reagent is described within the previous Blood Alteration II : Means & Methods paper.  The result of this test is positive, and at this point the protein is suspected to be a foreign protein that is created as a result of electrochemistry.  Further analysis of the nature of that protein will occur at a later stage.  An alkaline solution of sodium hydroxide is used to solubilize the protein.

All three components have also been isolated, identified and analyzed within CDB culture work over past decades.  Our major surprise here is that these components appear to be synthesized in some fashion, in a brief period,  as a result of electrical current conditions applied to the blood.

The trials that employed AC voltammetry were repeated on many occasions with identical results.

It does beg the question, however, of whether a simpler electrochemical technique might produce this same change blood.  The answer is yes.

It has been found that chronopotentiometry is sufficient to produce the same alteration and transformation that includes CDB and filament appearance, as well as the same protein formation.  Chronopotentiometry is a relatively simple technique where a constant DC current is applied to the sample and the voltage (potential) is measured as a function of time.  This is a much simpler “system” to develop and the fact that this method is sufficient to produce the radical blood transformation is important.  AC voltammetry will reenter the picture when protein analysis is discussed later.

It is appropriate to mention the magnitudes of various currents that are involved here. In general, the trials underway involve the use of at most a few milliamps (mA) (single digits) of current; this is quite low from any practical perspective.  The instrument under use is quite sensitive and is able to measure current down to the nano and pico amp ranges.

It is worthwhile question the amount of current in the body that is considered to be dangerous, harmful, or even lethal. It requires a surprisingly low current in the body to produce harm or death.  Research indicates that pain will be felt with internal current at approximately 10 mA  or greater, and that death can occur with a current greater than approximately 60 mA.  The significant finding here is that current on the order of just a few milliamps is enough to produce a complete transformation of the blood character and constitution.  It is difficult to conceive of blood as functioning in the body at any level once protein and microbial transformation takes place.

The electrochemical process (chronopotentiometry is sufficient) creates two primary separations, the frothy material under study above, and a bright red solid layer that will settle to the bottom as the solution clarifies.  This lower layer contains the bulk of the mass of the end result.  By most expectations, one might easily surmise that this bottom layer would be primarily or entirely comprised of blood cells, even if osmotically disrupted.  There is expected to be at least some hemoglobin contribution to this layer yet there are obvious foreign biologicals that predominate here as well.  Selected microphotographs will again show the seriousness of the problem.  The images are not anomalous; they are representative of the blood sample that is transformed with the use of low level electrical current. 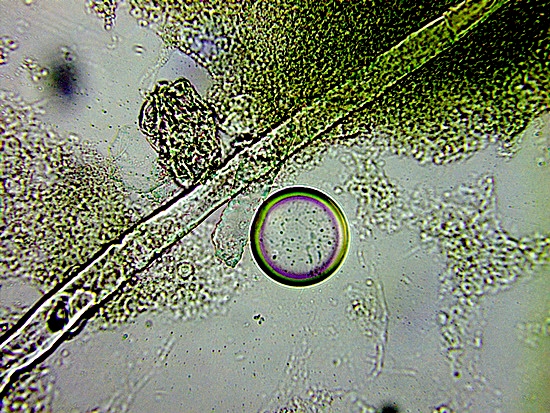 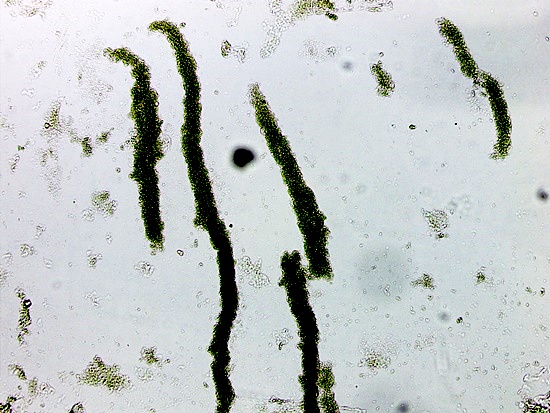 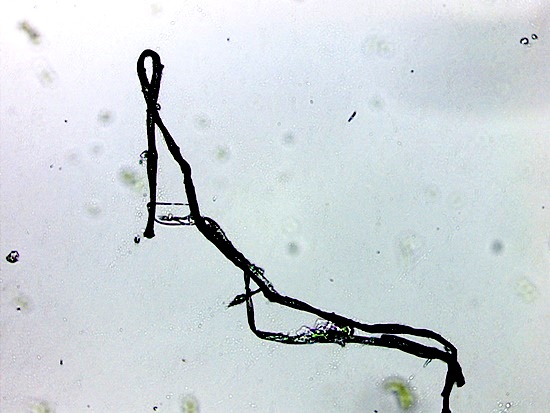 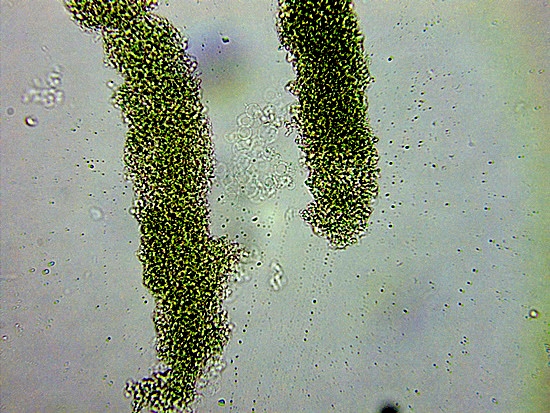 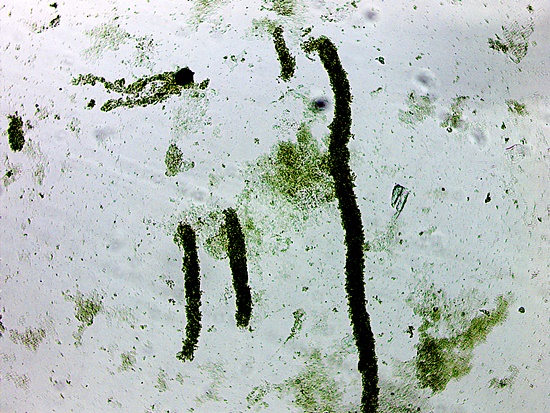 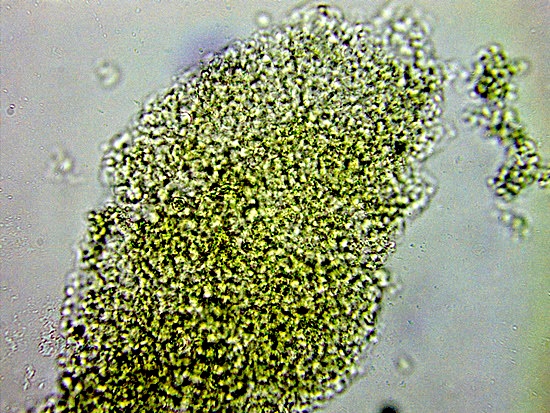 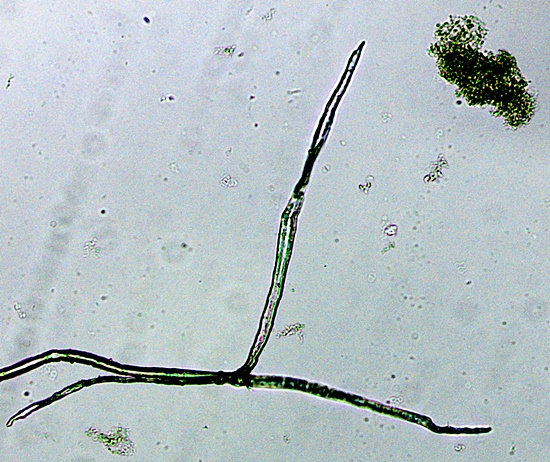 The above images are remarkable; it would be difficult to dispute this.  They show a profound transformation of blood.  The transformation cannot be considered anomalous at this point; it is, to the contrary, representative of the sample.  The CBD microbial presence and its various manifestations now dominant the the blood sample.  The transformation results from the use of low level electrical current . This same blood sample is known to contain the CDB microbial form before use of the electrochemical energy.  Thus far, no blood samples examined are immune from the presence of the CDB, except by degree of presence.

The “alignment” phenomena of the generated proteins also opens up a completely unexplored field of research.  Magnetics and electromagnetic field influence, natural or otherwise, are undoubtedly targets of interest.  There will also be no exceptions given to the influence of “vaccines” or other injections upon the human condition.

This portion of the sample also tests positive for the existence of protein, but the ability to separate between hemoglobin and a foreign protein cannot be determined from the reagent alone.  Analysis of the protein in a later paper will shed more light on this uncertainty.

The information above provides the justification for the opening statement of this paper.  Please distribute and preserve this report series globally.  Thank you.