Clifford Carnicom reproduced the same results of previous ELF experiments using only the human body as an antenna, with the captured data included on this page) showing the same 4Hz multiples of artificial ELF radiation in the environment found in previous Carnicom papers (see THE EARTH IS THE ANTENNA paper dated March 18, 2003). Using a digital ohmmeter, Carnicom determined the area on the body with the lowest resistance was on the skull right behind the ears. He attached electrodes behind both ears as input to his ELF circuit, and showed that the human body was an extremely effective receptor and resonator of ELF frequencies. 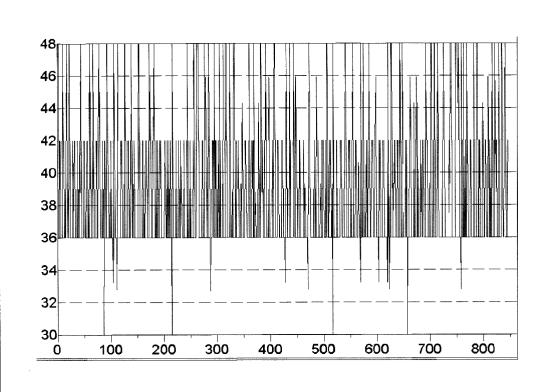 The fundamental frequency of the Extremely Low Frequency (ELF) data now being captured appears to have shifted to 6Hz as this day and time in a capture on March 19, 2003. Multiples of 6Hz are now readily visible in the graph of the data attached to this page. This is in contrast to the pattern of 4Hz that were logged on numerous other occasions. It is noted here that the cyclotronic resonant frequency of the barium ion (+2) in the presence of the earth’s magnetic field ranges from approximately 2.25Hz to 6.85Hz. The topic of cyclotronic resonance will be discussed at a later time. 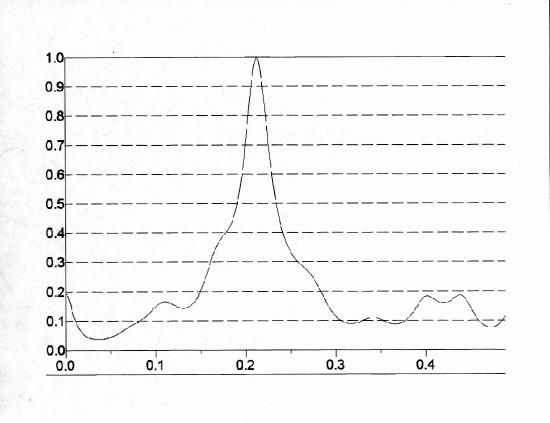 A fourth unique pattern of Extremely Low Frequency-Very Low Frequency (ELF-VLF) reception has now been logged. The graph on this page shows a periodic pulse occurring approximately every 4.75 seconds. The graph shown is a spectral analysis of the raw data collected, where the energy can be observed to be concentrated at a frequency of approximately .21 seconds, corresponding to the pulses which occur approximately every 5 seconds. Details of the setup for this capture are described in this paper.

This page discusses the role of aerosols, ionization, electromagnetic radiation and the creation of an artificial ‘plasma’ state in a now artificially modified atmosphere as they relate to the High Frequency Active Auroral Research Project (HAARP). It has been understood by Carnicom that the magnetic field of the earth is a primary medium by which we, as ‘subjects’, are being affected. The artificial patterns of ELF energy, characterized by unusual pulsations of frequency, cannot be most logically assumed to originate from the HAARP facility. Such energy forms have a myriad of applications in the military arena. Unfortunately, a parallel set of effects upon biological systems, health, and mental functioning must also be accepted as a price to be paid. Large amounts of energy are being directed into the magnetic field of the earth by the HAARP facility. This energy is being directed along the earth’s magnetic field lines to all living things. We have no way to evade this negative energy. This ELF radiation, although innocuously claimed to serve communications purposes and the like, does have an effect on biological systems. This energy can be detected and observed and its artificial nature identified. All findings are consistent with over four years of research on the aerosol operations, with applications of environmental, biological, electromagnetic, military and planetary control. 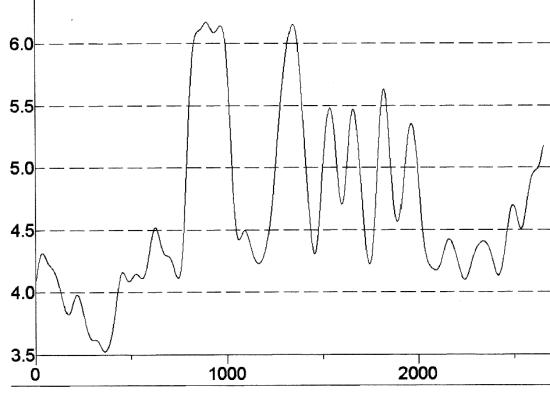 A pattern of anomalous Very Low Frequency (VLF) has again detected and recorded in Santa Fe, New Mexico on March 15, 2003. This marks the second time that unusual VLF patterns have been observed and measured within a 2 week period. Refer to the previous Carnicom paper titled A THIRD PATTERN OBSERVED: VERY LOW FREQUENCY PULSE SWITCHING (dated March 1, 2003) for another capture of this type of pattern. The testing procedure is similar to the previous few experiments, and is detailed on this page. It is hoped other citizens will begin the process of circuit construction to examine the findings that have been reported on this site during the last few months. It is in the interest of the general health of the population that such testing occurs. 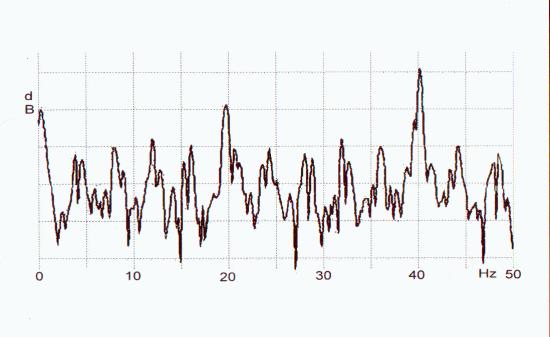 The spectrum of Extremely Low Frequency (ELF) signals has now been identified at multiples of 4Hz with the use of a digital spectrum analyzer/oscilloscope. The graph presented on this page was obtained with several significant modifications to the ELF circuit that has been described in the past few Carnicom papers, namely the paper titled ELF CIRCUIT DESIGN (dated January 26, 2003) with modifications that are discussed here and will be described further in a future paper. It was observed that the power of the signal being received is clearly of artificial origin and occurs at multiples of 4Hz. These frequencies occur in the range of the primary electromagnetic activity of the human brain. Research is currently underway to determine the direction (and eventual location) of the signals that are being generated and to which the populace is subject. Additional information on the directional parallel resonant loop antenna and the additional amplifier circuit will be forthcoming. It is requested that citizens across the nation and/or globe construct the circuit as it has been developed to assist in determining the origin of the signals through triangulation. Modifications for further enhancement are also welcomed. 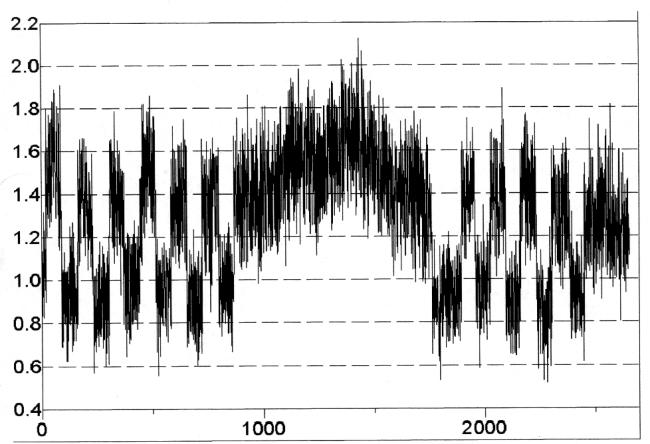 A third significant pattern in the Extremely Low Frequency (ELF) to Very LOW Frequency (VLF) portion of the electromagnetic spectrum has now been observed and recorded. The pattern is one of a series of higher frequencies followed by a series of lower frequencies, with a period of approximately 60-100 seconds for each group of pulses. There is no known local or residential origin for these signals. The current VLF observations are significant in that they are not continuously occurring; three segments of approximately 15 minutes duration were observed in Santa Fe, New Mexico on March 1, 2001. The switching and pulse nature of the observations abruptly ceases and starts, as is shown in graphs on this page. There is no gradual transition between the different phases, and the variation in frequencies appears to be the direct result of a constructed modulation system. 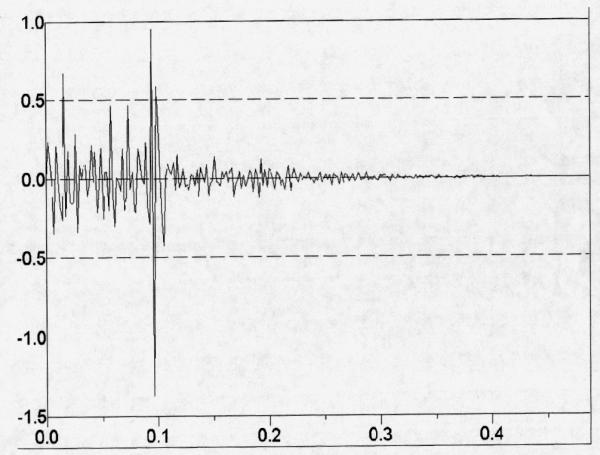 A second significant Extremely Low Frequency (ELF) pattern has been observed in data which has been collected at two different locations approximately 140 miles apart in New Mexico. This pattern is that of what appears to be pulsed ELF data occurring at a definite period of 10 seconds. This pattern is in addition to the previously identified pattern of geometric multiples of 4Hz. The previous pattern is primarily that of frequency structure; the current attention is devoted to the time structure of the signals that are becoming evident. Graphs of the captured periodic data is presented on this page, as raw data, digital filtered data to eliminate noise, and spectral analysis of the filtered data. The periodic component of 10 seconds is dominant and prominent in all analyses. These findings combined (geometric multiples of frequencies with a periodic component) strong suggest the existence of modulated ELF data, i.e., the transmission of signals with inherent intelligence. A description of the techniques used to capture this data is presented here, which includes using a human antenna. It bears repeating that the ELF frequencies that have been measured and detected fall within the same range as foes the primary electromagnetic energy of the human brain. Those with expertise in the electrical engineering fields are encouraged to assist in the research that is required to further analyze these results.

Further measurements of Extremely Low Frequency (ELF) waves were registered in the upper regions of Aspen Peak, New Mexico, on February 8, 2001. This location was chosen to avoid the 60Hz signals that are emitted by power lines in the United States, and the tests used a human antenna in parallel with the inductor in this circuit design (see the previous Carnicom paper titled ELF & THE HUMAN ANTENNA dated January 19, 2003 for the circuit design used, as well as an explanation of using a human body as an antenna). These waves detected are primarily multiples of 4Hz as in previous measurements, from 4-56Hz, which disturbingly is the same range as that of the human brain. Serious investigators who are interested in contributing to the state of knowledge on this issue are welcome to forward results to the Carnicom Institute. Any modifications and improvements that can be made to this circuit are welcome as well.

The Defense Information Services Agency (DISA) and the Department of Defense Network Operations (NIPR) have recently demonstrated a heightened interest in the research materials available on the carnicom.com website. This increased interest appears to correlate with recent presentations on the topic of Extremely Low Frequency (ELF) radiation. The DISA Mission Statement is included on this page, and more information about NIPR can be found in previous Carnicom papers titled NIPR ACTIVITY INCREASES (dated February 28, 2001) and NIPR.MIL 10 ½ HOUR VISIT (dated April 1, 2001). 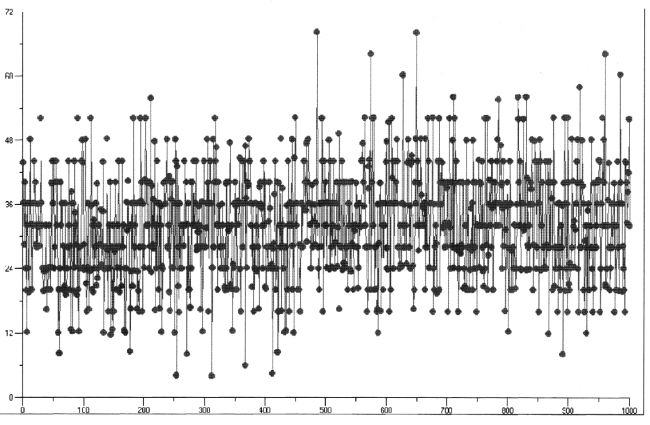 A further case for tracking down the origin of Extremely Low Frequencies (ELF) with 4Hz multiples in the ambient atmosphere is made here. The measurements included in this page were registered using Carnicom’s latest circuit design at the Bandelier National Monument in New Mexico on January 25, 2003, and mimic the frequencies measured in Santa Fe in the earlier Carnicom paper titled ELF & THE HUMAN ANTENNA (dated January 19, 2003) except for one notable thing: the 60Hz frequency that was observed in Santa Fe is absent as expected from the measurements, as the 60Hz frequency is known to be produced by power lines, of which there are none at the Bandelier National Monument. The closest town from Bandelier is 6 miles, and in this National Monument there is expected to be little to no frequency interference from other known sources. One other significant finding in these measurements is that the ELF signals appear to be that of a highly pulsed nature, versus that of power line pulses and their 60Hz frequencies. Citizens across the globe are asked to replicate the results presented in these experiments. The circuit diagram for this test unit will be presented at a later time. A request is made for those in the electrical engineering fields to contribute modification to this design as well. 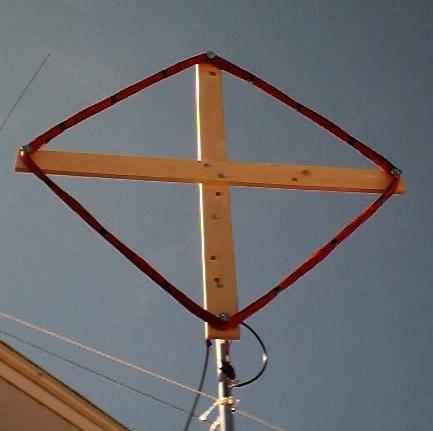 An updated circuit design to measure ambient Extremely Low Frequencies (ELF) is presented here with some modifications from earlier experiments. The circuit design itself is presented, as is the design for a loop antenna that is directional, meaning it can be rotated on its pole to determine the location of the ELF signal(s) being received by the circuit. Both sensitivity and bandwidth performance appear to be noticeably improved with this improved design. Further modifications will be added in later Carnicom papers. Those with electrical engineering knowledge are welcome to comment on the circuit and any inherent weaknesses or suggested improvements. It is advised that others around the globe construct this circuit, including any improvements that can be made, and report their results to the Carnicom Institute.