THE THEFT OF SUNLIGHT 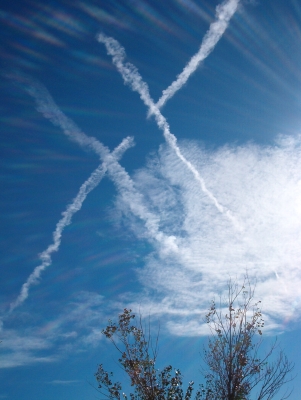 Measurements have recently been taken with a calibrated photometer to measure the reduction in intensity of sunlight that occurs as a direct result of heavy aerosol operations1. These measurements show a rapid reduction in the transmission of sunlight from a value of 97% on a “clear day” to the lower level of approximately 80% during the early stages of heavy aerosol operations. These measurements have been taken to coincide with the photographs below that show the aircraft aerosol trails systematically increasing the extent of the aerosol bank.

Rather than reducing the temperature of the earth and lower atmosphere, the aerosol operations commonly have the opposite effect of increasing temperature and aggravating, if not inducing drought conditions. This is a result of a combination of factors, including the specific heats of the elements involved as well as the hygroscopic properties of the aerosols. Physical and chemical analysis of the aerosol dynamics will lead to the expected observations of increased temperature, decreased moisture and an increase in winds. The absorption and displacement of this solar energy into environmental, military, biological and electromagnetic operations represents a theft of the natural and divine rights of the inhabitants of this planet. These are only preliminary effects upon the local and regional environments; longer term and more serious impacts upon the biosphere have been, are now and will become evident. 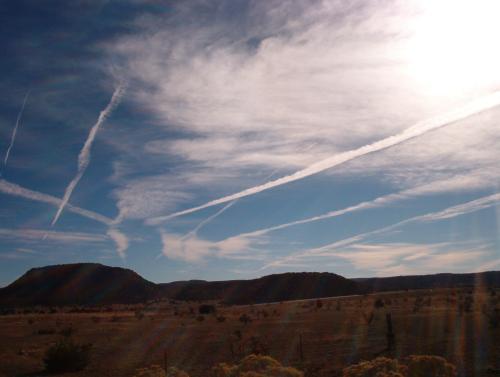 The Descent of the Aerosol Banks to Ground Level
A View from Santa Fe Towards Albuquerque on a “Clear” Day
Expected visibility in clear desert skies is approximately 90-120 miles
However, the Ortiz Mountains (closest range) visible in photograph
are only approximately 15 miles distant from the observer.